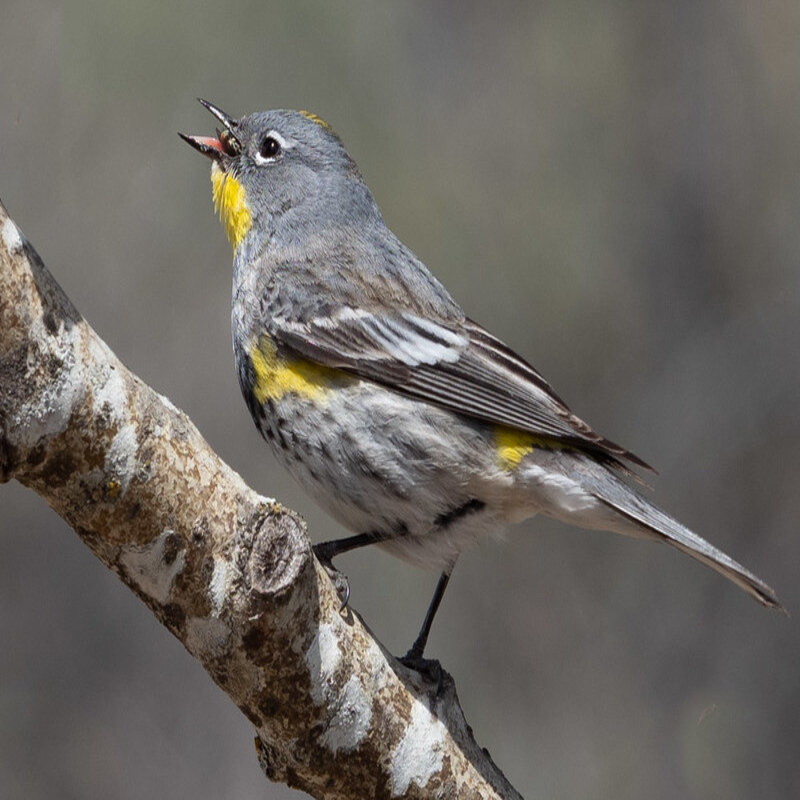 The yellow-rumped warbler (Setophaga coronata) is a widespread North American bird found throughout the continent. While all subspecies groups of the yellow-rumped warbler share a yellow rump, despite several similarities, intra-group and inter-group variance in appearance exists. The myrtle and Audubon’s groups, as two primary subspecies, are easily differentiated by distinguishing characteristics such as a different throat color.

Male myrtle warblers have black cheeks, but females have brown or gray cheeks, and both have gray backs with dark streaks during breeding season. Males of both Audubon’s subspecies and the myrtle have black on slate blue streaked backs, white wing patches, a streaked breast, and large yellow markings on the head, side, and rump (the latter earning the species the birdwatcher nickname “butter butt”).

Insects and berry-bearing plants. Feeds on caterpillars, wasps, grasshoppers, gnats, aphids, beetles, and a variety of other insects; spiders are also a food source. In the winter, it feeds on berries such as bayberry, juniper, wax myrtle, and poison ivy.

Yellow-rumped Warblers are forest birds that like open coniferous woods and edges, as well as deciduous forests to a lesser extent. They migrate to open forests and shrubby habitats during the fall and winter, including coastal vegetation, parks, and residential areas.

The Audubon’s and Myrtle’s are two of the most common neotropical migrants. They are mostly carnivores. This species is one of the most adaptive foragers. They, like other New World warblers, flit out of their perches in short loops to grab flying insects. Yellow-rumped warblers have been observed collecting insects from washed-up seaweed on beaches, rivers, and oceans, spiderwebs, and dung piles.

The myrtle and Audubon’s groups, as two primary subspecies, are easily differentiated by distinguishing characteristics such as a different throat color.

Distribution of the Yellow-Rumped Warbler in the USA

Its vast distribution spans both the Pacific and Atlantic coastlines of the United States, as well as Canada and Central America, with the population concentrating in northern regions of the continent during the breeding season and moving south to southern North and Central America during the winter.