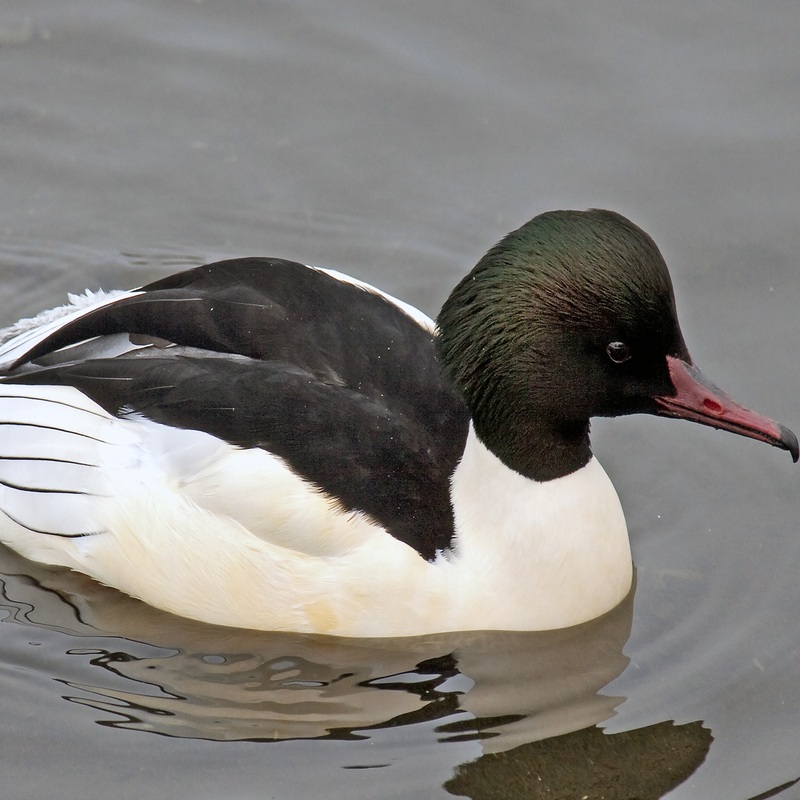 Common merganser, Mergus merganser or goosander (Eurasian) is a giant seaduck found in rivers and lakes throughout Europe, Asia, and North America. The common merganser is mostly a fish eater. It nests in tree holes.

The diving duck is a large, sleek bird with black upper parts and white underparts. The head and upper neck are green-black, and the crest of the head is rarely apparent. The long, slender bill is a brilliant crimson color. Black wings with several white patches.

Primarily fish. Consumes a variety of fish; will also consume mussels, shrimp, salamanders, and occasionally plant stuff. Adult males are capable of swallowing fish up to one foot in length. Ducklings feed primarily on aquatic insects.

Common mergansers like woody regions along streams and rivers, as well as locations near small inland lakes. They are also found around the Great Lakes’ coasts and on British Columbia’s coastal streams.

Frequently swim in small groups along the shoreline, dropping their heads deep enough underwater to hunt for food. With a little leap, dives regularly and easily (White 1957. Mergansers’ food and natural history on salmon waters in Canada’s Maritime provinces.

Distribution of the Common Merganser in the USA

Throughout much of North America, this species is prevalent. Breeds in forested rivers, ponds, and lakes from eastern Alaska to Newfoundland. Northern New England, southern Ontario and Quebec, and the western states are all home to this species.