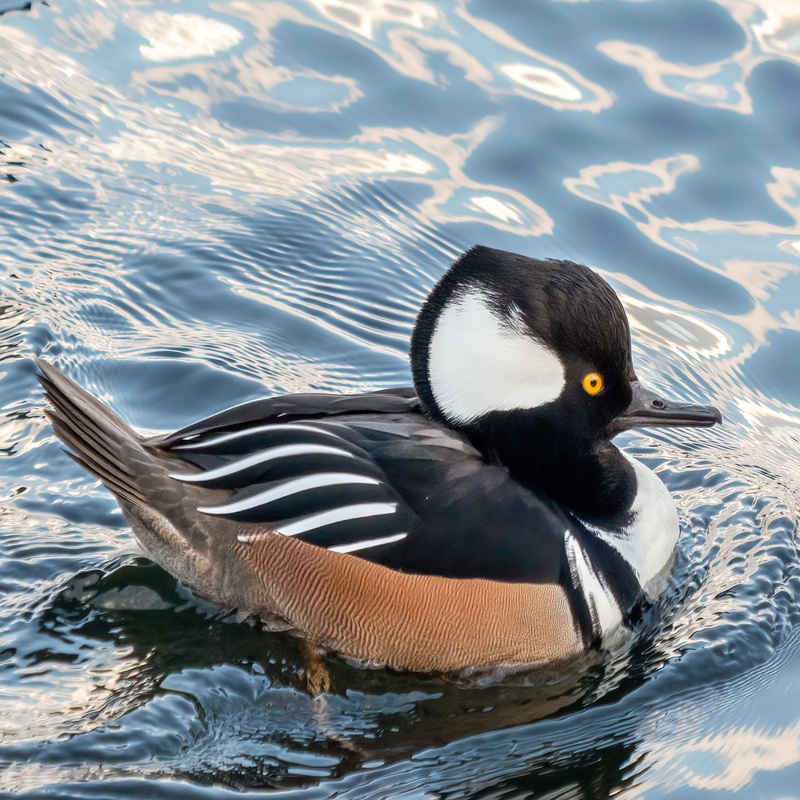 Merganser species hooded merganser (Lophodytes cucullatus). It is the genus Lophodytes’s sole extant species. The genus name stems from the Greek words lophos, which means ‘crest,’ and dutes, which means ‘diver.’ The bird is visually remarkable; both sexes have crests that can be raised or lowered, and the male’s breeding plumage is attractively patterned and colored. Although the hooded merganser possesses a sawbill, it is not normal merganser.

Small diving duck with a razor-sharp bill. Breeding males are distinguished by a prominent black-and-white crest, a few zebra stripes on the white breast, and cinnamon-colored sides. Females are brown with a fluffy crest and a bill that is partially yellow.

Aquatic life includes fish and other aquatic creatures. Feeds primarily on small fish, crayfish and other crustaceans, and aquatic insects; some tadpoles, a few mollusks, and trace amounts of plant material are also consumed.

Lakes, ponds, and rivers that are forested. In the summer, in forested areas, near creeks, narrow rivers, and pond edges. If artificial nesting places are supplied, they may be found in more open marsh settings. In the winter, woodland ponds, wooded swamps, and fresh and brackish coastal estuaries are frequent habitats.

Generally, the hooded merganser congregates in tiny groups of no more than ten or twelve individuals. When alarmed, they will flee. They are one of the swiftest flying ducks on the planet.

Distribution of the Hooded Merganser in the USA

Breeds in northern British Columbia, the Pacific Northwest, and central-eastern Canada, as well as in New England, the Great Lakes region, and the Ohio River valley. Winters in Baja California and the Gulf Coast states