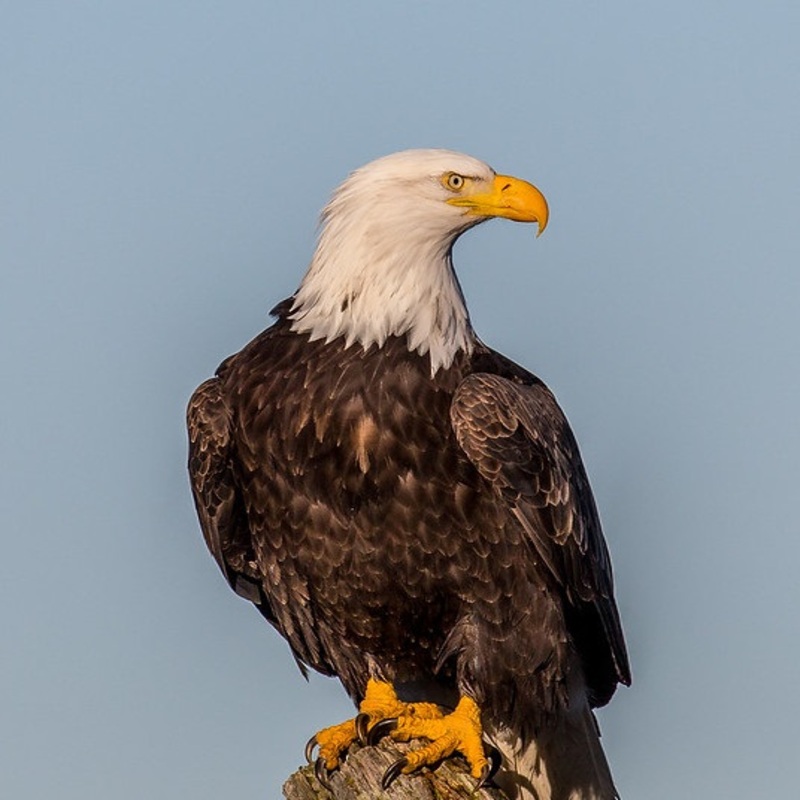 The bald eagle (Haliaeetus leucocephalus) is a North American raptor. With the white-tailed eagle, it is a species pair. Its range covers much of Canada, Alaska, the USA, and northern Mexico. It prefers big open water bodies with enough food and old-growth trees for breeding. These species belong to the family of Accipitridae.

The bald eagle is a North American raptor. With the white-tailed eagle, it is a species pair. These famous birds have four different development phases, each lasting one year. During the first 18 to 22 days of life, bald eagles have black eyes, pink legs and skin, and flesh-colored talons. Their underwing coverts and axillaries are white throughout their first year. Their eyes lighten to grayish-brown, their superciliary line lightens, and their body becomes mottled white. In their third year, their bills and eyes become yellow, and their head feathers brighten, but their bodies stay mottled. In their 4th year, their body turns mainly black, with some beige around their eyes and crown, and isolated dark patches on their tail.

Bald eagles enjoy vast water bodies such as sea coastlines, coastal estuaries, and interior lakes and rivers. The abundance of prey, towering trees, and human disturbance influence the choice of habitat. Bald eagles will not feed if their foraging habitat is disrupted by humans. While food availability is crucial, bald eagles will choose places away from foraging grounds to avoid human contact.

Bald eagle migration patterns vary throughout their regions. Some populations, like Yellowstone’s, only move locally for better feeding options, whereas many southern populations never migrate. Similarly, populations nesting in the Great Lakes region may migrate toward the Atlantic coast, down to the Chesapeake Bay, while populations from the northeastern United States and Canada may move south and interior, toward the Appalachian Mountains. Migratory birds cluster in regions rich in food, especially those with open water for hunting.

Distribution of the Bald eagle in the USA

Bald eagles (Haliaeetus leucocephalus) inhabit major lake bodies in North America. Birds of Canada, the United States, Mexico, and many islands including Saint Pierre and Miquelon. Populations are found in Florida, Alaska, the Pacific Northwest, and along certain Midwest rivers and lakes. It is not known how many there are in Vermont or Arizona.