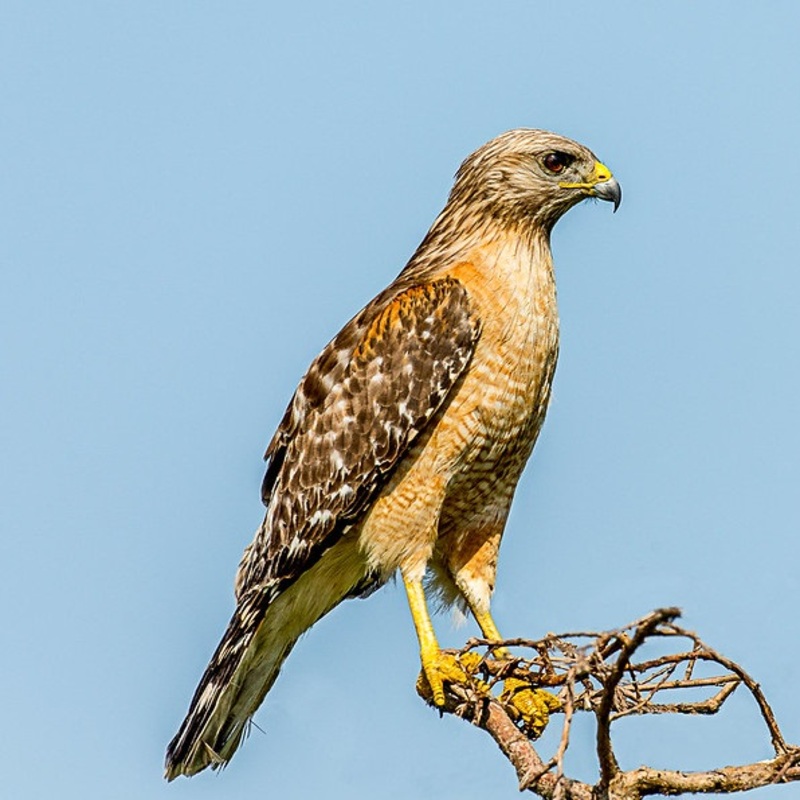 Known as the Red-shouldered hawk, Buteo lineatus, breeds in eastern North America, California, and northern and northeastern-central Mexico. Throughout its range, it is a permanent resident, however, northern birds migrate to central Mexico. Deforestation is the biggest danger to the species’ survival.

Red-shouldered hawks eat mostly small animals, such as rabbits, and squirrels. Other foods include snakes, toads, frogs, lizards, tiny birds, and insects. In some areas, red-shouldered hawks feed on crayfish. Red-shouldered hawks hunt prey from treetops or flying above forests. When they see prey, they descend directly on it from the sky. So they can eat later.

Forested areas and swampy areas are preferred habitats for red-shouldered hawks. Usually found in moist woodlands, they construct their nests 6 to 15 meters (20 to 60 feet) above ground. They love dead trees nearby where they may perch and see the forest floor.

They are solitary and territorial. Even in the cold, they do not flock. They don’t migrate in most cases. They stay in one place all year. Birds that breed in the north (northeast US and southern Canada) migrate to northern Mexico during the winter.

Distribution of the Red-shouldered hawk in the USA