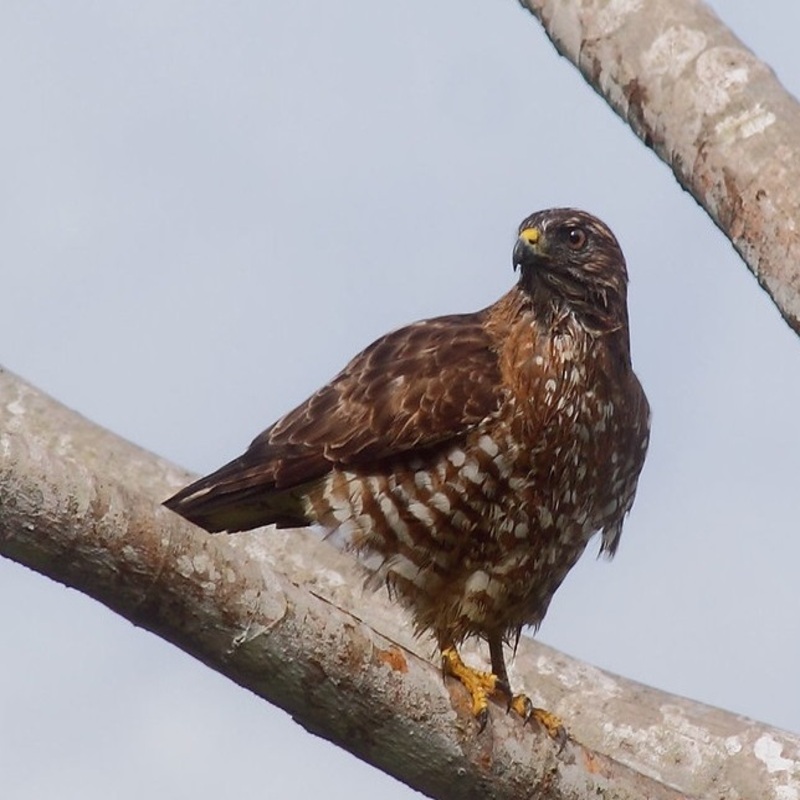 Buteo platypterus, known to be a Broad-winged hawk, in the Neotropics from Mexico to southern Brazil. Some subspecies live year-round on Caribbean islands. Females are bigger than males in most raptors. Wide-winged hawks have short, broad wings with a tapering, pointed tip. In addition to the two coloring kinds, there are also two morphs: dark and light. Although broad-winged hawk numbers remain steady, forest fragmentation is reducing populations in some areas.

Small, stocky Broad-winged Hawks, they are 34-44 cm long and 265-560 g. Their wingspan is 81-100 cm. Adults have a dark brown back and a light belly with horizontal cinnamon or chestnut barring. On the tail are a prominent broad white stripe in the center and two less prominent white stripes at the base and tip. Broad-winged hawks fly with pointed wingtips. They don’t have wings that reach the end of their tails when perched.

Except when migrating, broad-winged hawks are alone. This is one of North America’s rare flocking raptors. During migration, flocks (called kettles) can reach tens of thousands. Other raptors may join these flocks. Broad-winged hawks, like many hawks, can soar. They employ thermal currents to migrate, saving energy by not flapping their wings.

Distribution of the Broad-winged hawk in the USA

Broad-winged hawks are endemic to the Nearctic and Neotropical areas. They breed in the eastern United States and most of southern Canada. Their winter range includes southern Florida, the Pacific coast of southern Mexico, Central America, and northern South America.