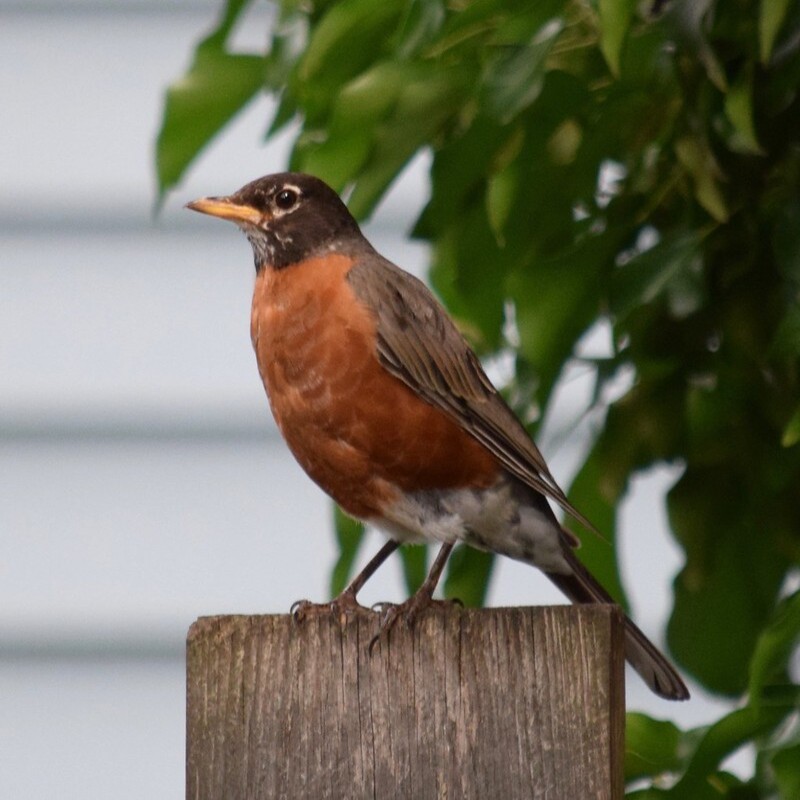 The American robin, Turdus migratorius is a migratory songbird belonging to the genus Turdus and the family Turdidae. It is called after the European robin due to its reddish-orange breast, despite the fact that the two species are not closely related; the European robin is a member of the Old World flycatcher family. The American robin is most active during the day and flocks together at night. It is one among the earliest birds to sing at morning, and its song is composed of multiple repeated distinct pieces.

American robins are 25 cm in length and weigh an average of 77 g. Males and females are just slightly bigger. Their backs are brown, their breasts are reddish, and their lower abdomen and under their tail feathers are white. Their necks are white with black streaks. Above and below their eyes are white crescents. Females are a little paler than males. American robins in their youth have black markings on their breasts and are lighter in hue than adult males.

American Robins eat a variety of fruits, berries, earthworms, and insects, including beetle grubs, caterpillars, and grasshoppers. Robins are adaptable and will eat whatever food is available, while their diets typically consist of roughly 40% invertebrates and 60% fruits and berries.

Robins in the United States are mostly found in forests, gardens, orchards, lawns, and fields. They prefer open ground or short grass feeding grounds surrounded by woods or a few scattered trees and bushes for breeding and roosting. Because suburban and agricultural areas frequently provide these habitats, American robins are prevalent in close proximity to humans. They require thick bushes and small trees for nesting. To defend their young from predators, they construct nests deep amid dense vegetation.

American robins are predominantly active throughout the day. They are gregarious birds, particularly during the winter when they congregate in huge numbers on their winter grounds. At night, they congregate in big groups, often in a remote marsh or dense vegetation region, where they roost in the trees. During the day, these winter aggregations disperse to feed in smaller flocks on fruits and berries. During the summer, American robins defend breeding territory and are less sociable.

Distribution of the American Robin in the USA

Breeds from Alaska and the Northwest Territories east to Newfoundland, and from California, Texas, Florida, and South Carolina. Winters in extreme southern Canada and central Mexico.