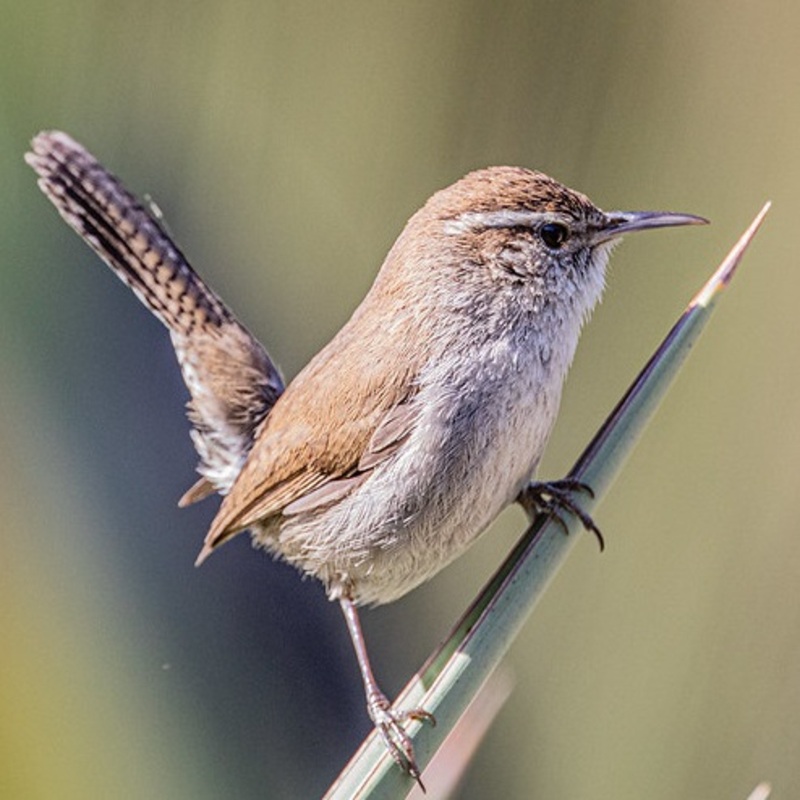 Thryomanes bewickii or commonly known as Bewick’s wren is a North American wren that measures 14 cm (5.5 in) long and has a long white brow. Unlike the Carolina wren, it has a long whitetail. They belong to the family of Troglodytidae. The song is loud and melodic, like other wren songs. It inhabits thickets, hedgerows, open woods, and scrubby regions near streams. It feeds on insects and spiders found in plants or on the ground.

Bewick’s wrens are tiny, weighing in at around 10 g. Intact, brown backs, grayish-white bellies. Their major distinguishing feature is a white stripe running across their eyes, like brows. Their tails are long and brown-white striped. Their tails swish as they leap from branch to limb, typically held high. Male and female Bewick’s wrens look alike. Adults are paler than juveniles, but otherwise similar. Colors vary per area. Northern Bewick’s wrens have rustier plumage than southern ones.

The Bewick’s wren feeds on arthropod adults and larvae. They utilize their sharp beaks to dig out arthropods from bushes and shrubs. Females graze on the ground while males browse higher in the trees. This means more food alternatives and a higher chance of locating it. The Bewick’s wren prefers live food and will eat it alive. They will shake or bash the bug to death. They usually swallow their prey entire, but sometimes only the extremities. Bewick’s wrens eat by pecking.

It is a diurnal bird that does not migrate. You can hear them calling and singing to protect their area and locate partners. Bewick’s wrens are noisy and vivacious. Their bodily postures change according to the tunes or calls they make. In order to assert their dominance or warn predators, Bewick’s wrens use a variety of vocalizations. They typically indicate territorial defense by shaking their tails and fanning their feathers. Male Bewick’s wrens woo females by holding their heads high and tucking their tails beneath.

Bewick’s wrens like chaparral and sage scrub. They like dry, bushy conditions, but also wooded places near water. Bewick’s wrens seek refuge in caves, rocks, and holes. They nest in live oak and willow tree cavities. They often construct nests in man-made structures like wood buildings and birdhouses. The profusion of man-made buildings and urbanization has not reduced the wren population number.

There are 15 subspecies, two of which are extinct. The color of the dorsal feathers can be used to differentiate subspecies, although museum specimens tend to change color after a few years of storage.

Distribution of the Bewick’s wren in the USA

Bewick’s wrens are found in the northern United States. This species is found in North America, from Baja California to Washington. They are found in Arizona, New Mexico, and Texas. Climate change and other environmental issues have caused Bewick’s wrens to go extinct along the east coast. They thrive in warmer temperatures and are found throughout Mexico.

The Bewick’s Wren can be also found in the following states in the United States – Arkansas, Colorado, Idaho, Kansas, Kentucky, Nevada, Tennessee, and Utah.