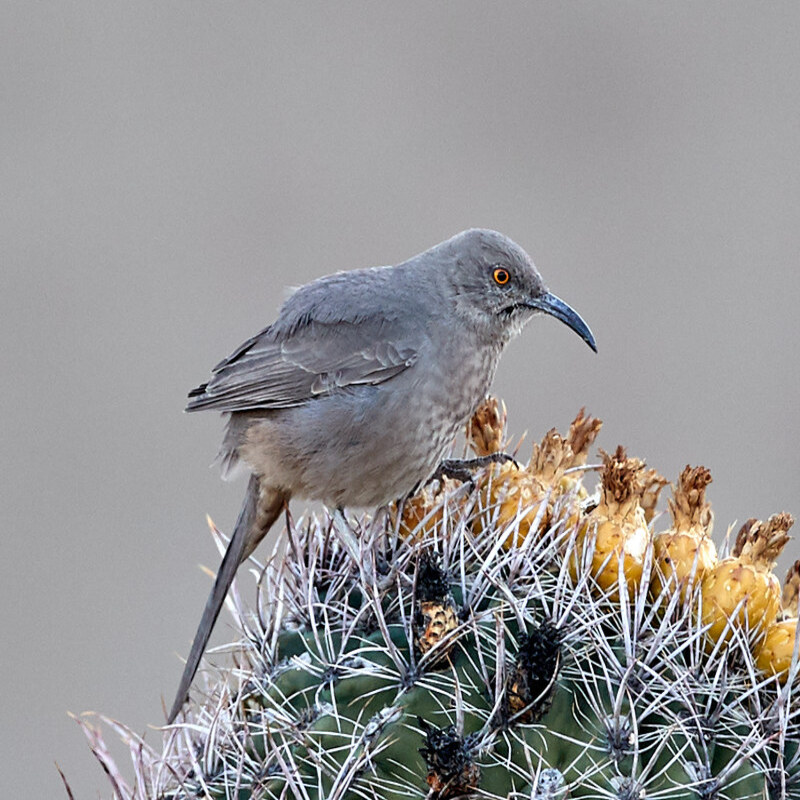 Campylorhynchus Brunneicapillus or commonly known as Cactus Wren is native to the deserts of the southwestern United States and northern and central Mexico. It is the state bird of Arizona and the country’s biggest wren. Their song is a loud raspy chirp, compared by some ornithologists to a non-starting automobile engine. It is highly suited to its desert habitat, and the birds can get their water needs from their diet of insects and plants. The cactus wren is a ground feeder that cannot fly.

Cactus wren has a large, slightly decurved beak, a dark head with a characteristic white stripe over the red orange eye, a gray-brown back with white and black streaks, and a buffy-white belly and flanks. Black with white barring wings and tail feathers, dark legs. Adults have darker breast markings and longer tails.

The Cactus Wren eats ants, beetles, grasshoppers, and wasps. It also eats seeds and fruits. The cactus wren forages among the foliage and branches of bigger plants, as well as under leaves and ground litter. As temperatures rise, foraging behavior shifts to shadier, cooler microclimates, and activity slows during hot afternoons. Water is acquired almost exclusively through food, and when discovered, it is rarely used.

The Cactus Wren is widespread throughout the American Southwest. This hot, dry desert is dominated by cholla and other succulent cacti, as well as prickly trees and plants. Other locations include arid slopes. The Cactus Wren is located below 4,000 feet but can be found up to 6,000 feet in New Mexico.

The Cactus Wren is a lively, curious bird that thrives in dry desert settings. Heat stress is avoided by daily and seasonal changes in foraging behavior according to temperature; they relocate to cooler, shaded microclimates and reduce activity during the warmest portion of the day. Primarily low-level flight.

Distribution of the Cactus Wren in the USA

There are several species of Cactus wren that live in the deserts of the southwestern United States. They are found in desert regions extending from southern California through Nevada, Colorado, Oklahoma, and Utah, to the middle of New Mexico and Texas, and southward to central Mexico.