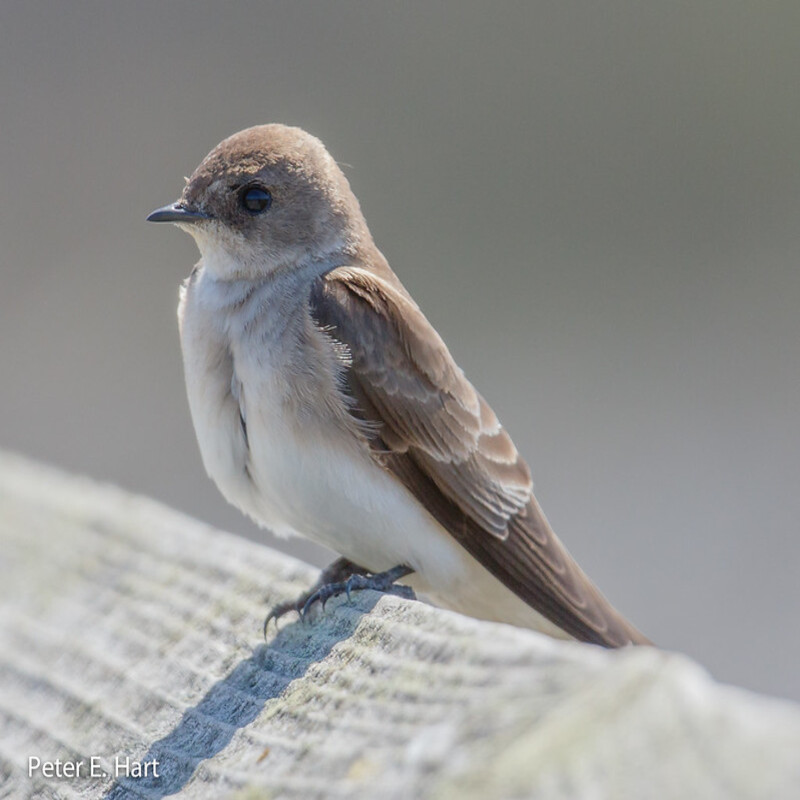 Northern rough-winged swallow, Stelgidopteryx serripennis is a migratory swallow with a tiny size. It is quite similar to the Southern Rough-winged swallow. The Rough-wing is a single bird, unlike the Bank Swallow, which nests in colonies. It is often observed alone or in small groups, even during migration, flying rapidly low over rivers or fields. The name ‘Rough-winged’ refers to the tiny serrations on the wing feathers’ outermost feathers.

ThA little, stocky swallow with brown upperparts and whiter underparts, as well as a pale brown throat. The tail is squared off with white coverts on the underside. The name is derived from the small hooks present on the outer primary feathers.

Insects. Feeds on a range of flying insects, including a vast variety of flies, wasps, winged ants, bees, true bugs, and beetles. Additionally, it consumes a variety of moths, caterpillars, mayflies, damselflies, and spiders.

In the vicinity of streams, lakes, and river banks, as well as arroyos in an arid land. Widespread across the open areas, but is most frequently seen near water, nesting in vertical dirt banks (as along stream banks, river bluffs, gravel pits). May also nest in the arid country near dry washes, but prefers to eat over water, fields, or dense vegetation.

Rough-winged Northern Swallows nest in burrows dug by other species, such as kingfishers, squirrels, and Bank Swallows, in clay, sand, or gravel banks, usually near bodies of water. Additionally, they nest in gutters, boxes, drainpipes, walls, and bridges. Northern Rough-winged Swallows are medium-distance migrants. Swallows generally migrate to Mexico and Central America in flocks of mixed swallow species. They come in April and depart late summer, just after the young fledge.

Distribution of the Northern rough-winged Swallow in the USA

Breeds over much of the continental United States, from southeastern Alaska and southern Canada southward. Winters in Southern California, along the Gulf Coast, and in southern Florida.