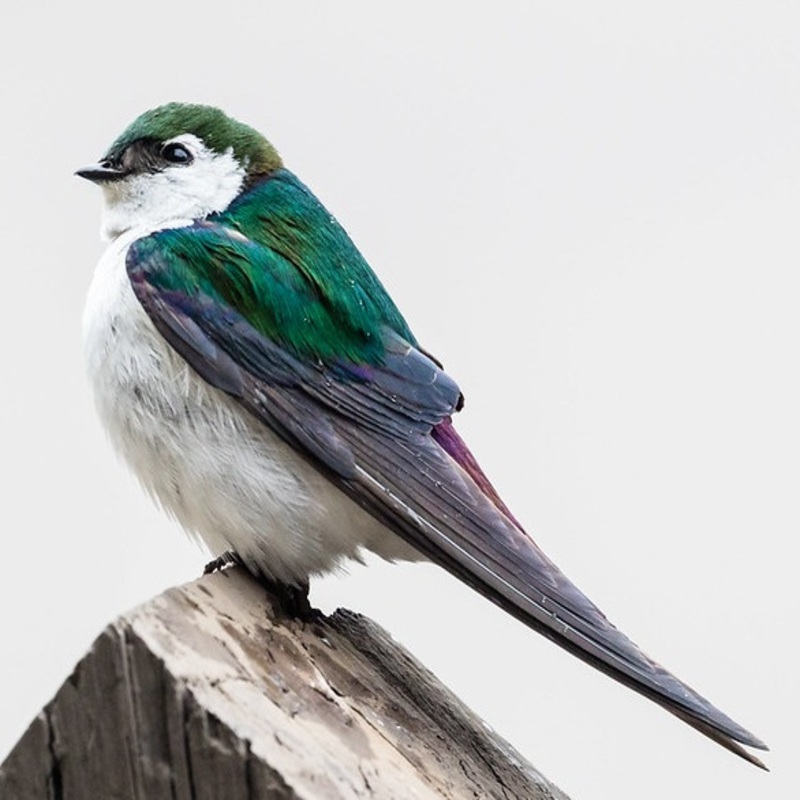 It is a member of the swallow family. These airborne insectivores are found from Alaska to Mexico, and east to Montana and Texas. These birds are distinguished from tree swallows by the white rump side-patches that appear to split their green back and purple tail. Violet-green swallows are cavity nesters found in deciduous and coniferous forests. They are often seen breeding in enormous rock crevices as well as in tree holes within similar settings.

Male and female violet-green swallows have forked tails and average 13 cm in length. Their wings are much longer than their tails while perching. They have long, pointed bills for catching flying insects. Adult males have dark green rumps and white throats. Males have greenish-tan backs, iridescent violet rumps, white throats, and green crowns. Adult females have light-tan crowns and smaller heads and bills than adult males.

Migratory violet-green swallows like open areas near water, such as meadows and rivers. These settings feature mosses on the ground and flora that retains moisture within the tree canopy. Because violet-green swallows feed on flying insects that need damp soil to live, dry soil can reduce insect populations, affecting this species’ numbers. Violet-green swallows nest in cavities in many settings. In Mediterranean woodlands like California, they can exploit rotting trees or woodpecker holes to make their cavity nests.

Outside the mating season, violet-green swallows form foraging flocks. These flocks might number in the hundreds. During the mating season, both sexes defend their nests against competition. Despite this, they may breed in groups depending on resources. Violet-green swallows over-preen and sunbathe to prevent parasites. They bathe by flying over the water, softly brushing it with their feathers, then soaring up to shake it off.

Distribution of the Violet-Green Swallow in the USA

Breeds from Alaska to northern Mexico, passing through the Yukon and British Columbia, as well as the western states. Winters primarily south of the United States-Mexico border, with a few exceptions in southern California.

The Violet-Green Swallow can be found in the following states in the United States – Arizona, Colorado, Idaho, Montana, Nevada, New Mexico, Oregon, Utah, Washington, and Wyoming.