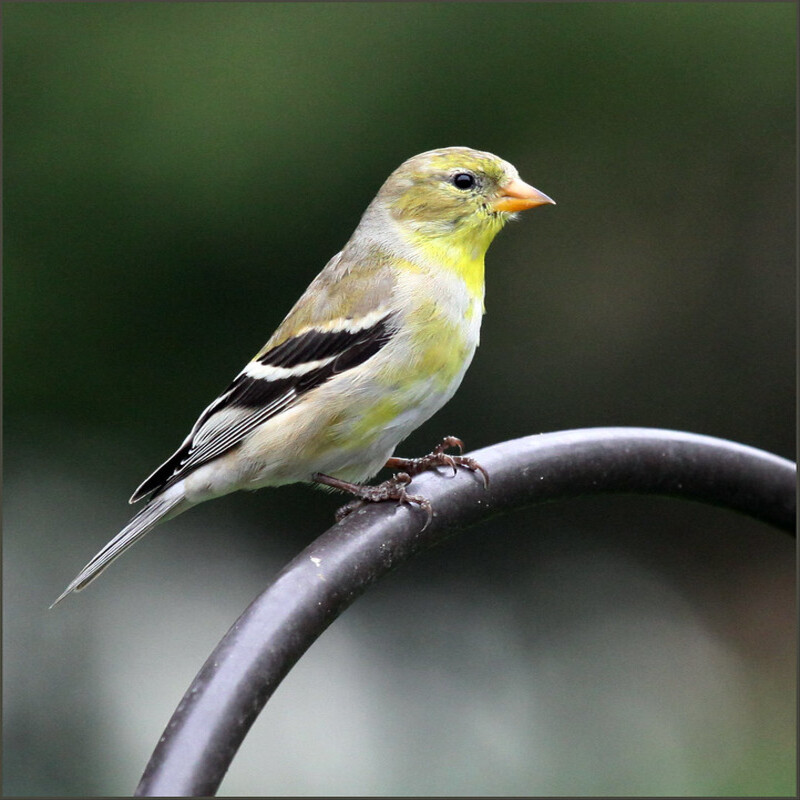 The American goldfinch (Spinus tristis) is a small finch found in North America. It is migratory, spending the breeding season from mid-Alberta to North Carolina and the winter from just south of the Canada–United States border to Mexico. Human activity has benefited the American goldfinch in general. It is frequently encountered in residential areas, where it is attracted to bird feeders, which increase its chances of survival in these areas. Additionally, deforestation creates open meadow areas, which are the preferred habitat for this species.

American goldfinches are small finches that are easily identifiable by their males’ bright yellow coloring during the breeding season. Their throat, upper back, and belly are covered in yellow or gold feathers. Their wings, tails, and crowns are all glossy black. After molting and transitioning into summer plumage, a white spot is usually visible above the males’ tails. In the winter, adult females, juveniles, and males are olive-brown above and olive-yellow below. Their wings are a dull brownish-black color.

Goldfinches in the United States are granivores, consuming primarily seeds, weeds, and occasionally pine cones. They feed primarily on grass seeds, thistle seeds, and seeds of other low-growing herbaceous plants. They frequently consume seeds while perched atop a plant, but also from the ground. In the winter, when natural food sources are scarce, birds frequently rely on feeders in parks and backyards. They will occasionally consume insects if they come across them.

American goldfinches are found along the edges of numerous forests and plains. Their preferred habitats are weedy fields and floodplains. Early successional growth areas, cultivated lands, roadsides, orchards, and suburban gardens are all examples of these habitats. They prefer areas that are overgrown and densely forested. They frequently congregate in areas with high concentrations of thistles, asters, and other deciduous plants.

The American goldfinch is a diurnal and social bird that forages in small groups. Their primary mode of locomotion is flight, but they can also hop or walk. They fly in the characteristic undulating manner of finches. They beat their wings several times, which propels them upward, followed by a brief descent on closed wings. This flight imparts a light, buoyant, dancing appearance on a flock. They frequently imitate and fluff their feathers in the presence of other American goldfinches. American goldfinches are nocturnal, frequently settling in areas for brief periods before moving on.

Distribution of the American goldfinch in the USA

American goldfinches are found throughout the Nearctic and the majority of North America. During breeding seasons, their range extends as far north as Saskatchewan, Quebec, and southwest Newfoundland. They spend the majority of the year in the United States’ middle latitudes, specifically the Pacific Northwest, Midwest, and the eastern United States. Winters are spent in southern states, from California to Mexico, along the Gulf Coast, and throughout Florida.