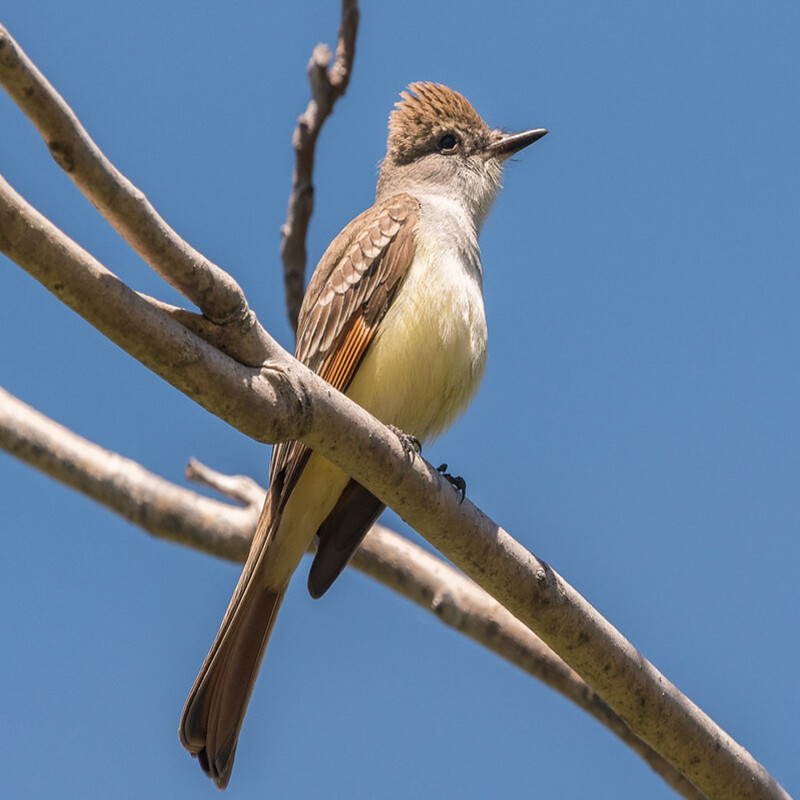 The ash-throated flycatcher, Myiarchus cinerascens is a tyrant flycatcher species of passerine bird. It breeds from the western United States to central Mexico in desert scrub, riparian forest, brushy pastures, and open woodland. It is a short-distance migratory, passing across the majority of the United States and northern and central Mexico and wintering in southern Mexico and Honduras. Additionally, this species is prone to roam, with single individuals frequently sighted as far away as the east coast of North America.

Their backs are brown, their wings are gray, their chests and throats are pale gray, their bellies are pale yellow, and their legs and feet are black. Their tail is long, rust-colored, and dark at the tips. Their head is crowned with a tiny crest and they have a thin, narrow bill. Juveniles are often paler and have a redder tail than adults, but otherwise look similar.

Ash-throated flycatchers inhabit a variety of primarily dry environments, including arid, open woodlands, dry woods, scrubby desert areas, thorn forests, and oak savannas, many of which contain mesquite, saguaro, pinyon pine, oak, or juniper trees. Although they are found in a variety of habitats, they prefer dry lowland areas with nesting chambers.

The ash-throated flycatcher is a diurnal species that spends most of its time looking for food. They may, however, travel at least partially during night, according to some reports. They are frequently photographed capturing insects in flight but have also been observed catching insects on the ground or feasting on small fruits. These birds are foragers at ground level and rarely venture into the forest canopy.

Distribution of the Ash-throated Flycatcher in the USA

Ash-throated flycatchers breed throughout the western coast of the United States, with populations ranging from mid-Texas to Washington, Idaho, Wyoming, and western Colorado. Myiarchus members are frequently difficult to identify, however those occurring in the far northwestern United States are typically ash-throated flycatchers. They move to southern California, Arizona, Mexico, and Honduras during the winter.