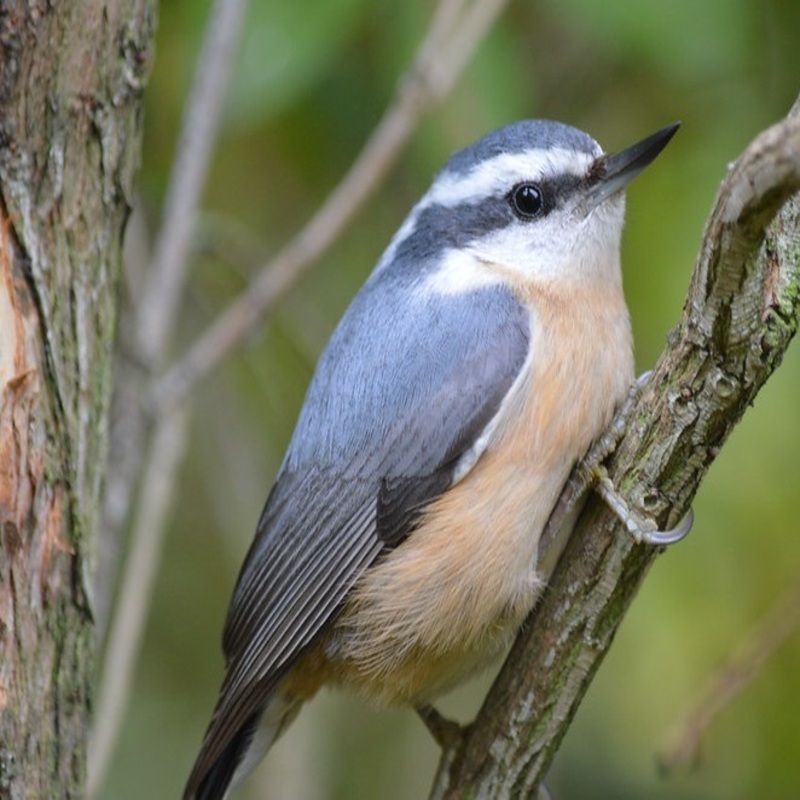 Sitta canadensis, the red-breasted nuthatch, have blue-grey upperparts and cinnamon underparts, a white neck and face, a straight grey bill, and a black crown. Its cry is high-pitched and nasal, like a tin trumpet. A permanent inhabitant, it irrupts further south when its food supply runs out. Vagrants have been reported as far south as the Gulf Coast and northern Mexico. It feeds on tree trunks and big branches, sometimes catching insects in flight. Mainly insects and seeds, especially conifer seeds. The escarpment is used to seal the entrance to its nest in deadwood near the ground.

A long tapering beak and compact body characterize Red-breasted Nuthatches. As a result, they may descend trees headfirst or travel down the undersides of branches with their back to the ground. They average 11.5 cm in length and 10 g in weight. An eye stripe of black and white is unique to this North American nuthatch. Other distinctive features include a black crown on the head, a bluish-gray back, and a yellow or brown underbelly. The chin, cheeks, and neck are white, while the outer tail feathers have white bands and black tips. Their ten primary flying feathers are long and pointed.

It feeds on pine, spruce, and other conifer seeds and insects such as beetles, wasps, caterpillars, crane flies, moths, and insect eggs (BirdLife). During the breeding season, the diet consists of arthropods and conifer seeds. The young are only fed insects.

In mature coniferous or mixed conifer-deciduous forests, red-breasted nuthatches breed. They like stands with a towering canopy and a thick seedling understory. This structure protects arthropods against predators and adverse environmental circumstances.

Unlike many other bark gleaning species, red-breasted nuthatches use one foot higher to hang from and the other lower for support. This allows them to descend trees headfirst. Climbing down trees allows them easier access to food in bark cracks that up-climbing species miss.

Distribution of the Red-breasted nuthatch in the USA

Sitta canadensis is found in the Nearctic. It is the only migratory Sittidae species. Alaska, Yukon, Mackenzie Valley, central Quebec, and Newfoundland are among its northern breeding range. It breeds in the United States from central Minnesota to northern California. They breed throughout the east coast from southern New York to eastern Tennessee and western North Carolina. It sporadically migrates to southern Arizona, New Mexico, Texas, and northern Florida.