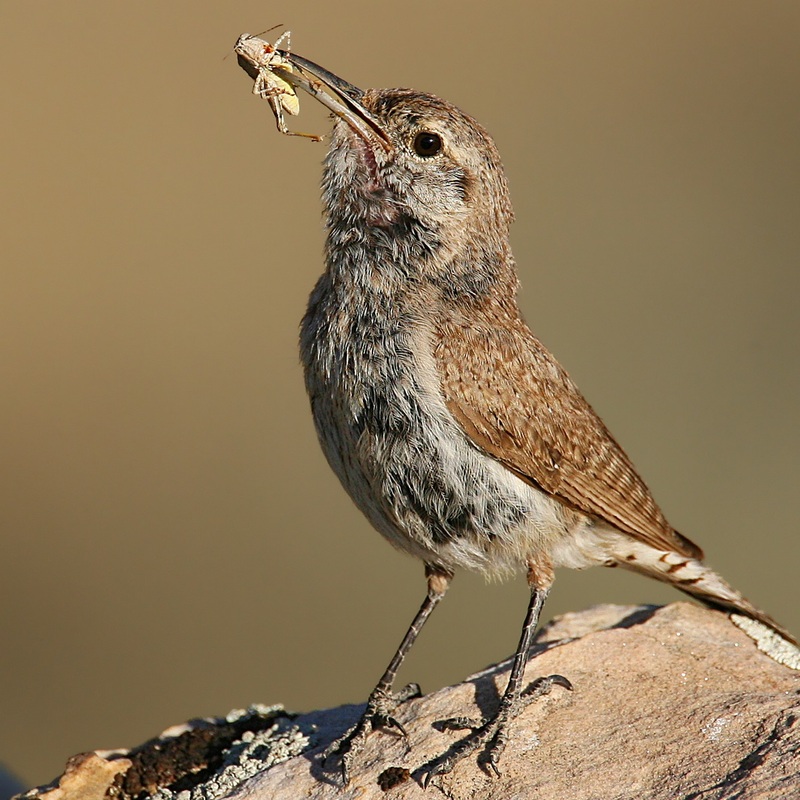 Salpinctes obsoletus or commonly known as Rock wren is a small songbird from South and Western America. Salpinctes have only one species and they are a member of the Troglodytidae family. Rock Wrens are one of the few bird species that use altered human landscapes. Some of the places they’ve been found to nest are road cuts and railroad tunnels.

With white spots on gray upperparts, a brown rump, white over the black eyebrow, a white throat and breast with fine gray streaks, and buff-yellow flanks and belly, this medium-sized wren is easily identified. The long tail is barred in the buff and black and has a pale tip; the under tail coverts are white with black bars on either side.

Eats insects and spiders, and forages for food in and between rocks and other structures.

Rocky slopes and outcrops, canyons, cliff walls, and reservoir rip-rap are all examples of rip-rap that can be found in arid environments.

It forages on the ground, probing holes with its bill. Will forage in low bushes or trees. They usually scavenge insects from rocks or vegetation, but will also fly up to catch prey in mid-air. Also seen picking insects out of spider webs.

Distribution of the Rock wren in the USA

During the winter, northern populations fly south to the Midwest, Southwest Canada, and South America. Southerners live there permanently. In Mexico and Central America, they live in dry ruins of Mayan and Aztec civilizations.