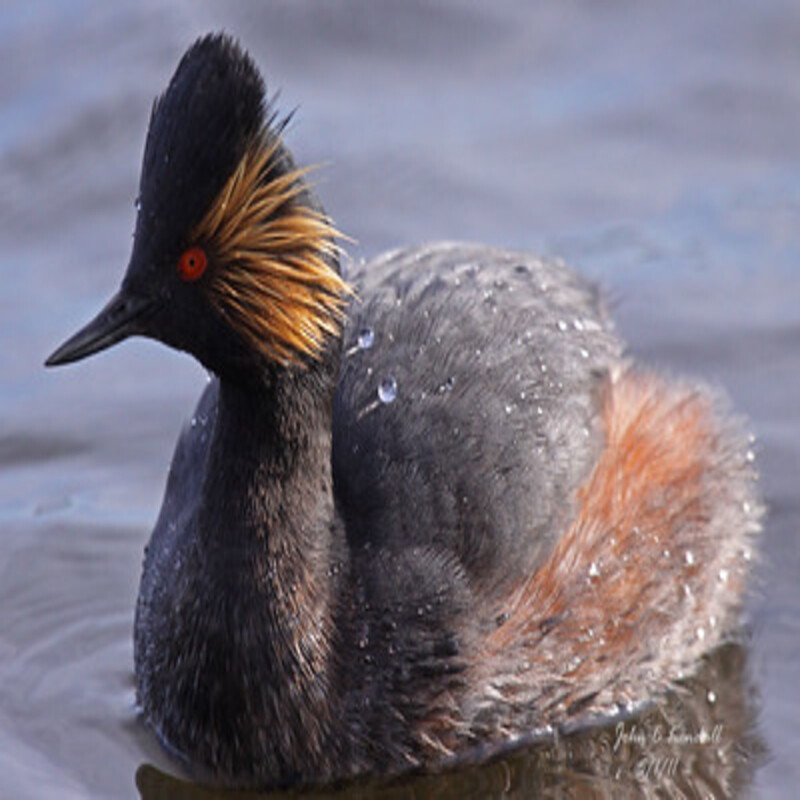 The black-necked grebe, Podiceps nigricollis is a grebe Podicipedidae family member. Its breeding plumage is ochre-colored and extends behind the eye and across the ear coverts. The remainder of the top is black to blackish brown, including the head, neck, and breast. Abdomen and flanks are tawny rufous to maroon-chestnut. This bird’s non-breeding plumage is greyish-black with a vertical stripe on the back of the neck.

The black-necked grebe forages in many ways. Insects are collected either on the surface of the water or in flight by this bird. It does some leaf gleaning. Fish and crustaceans are the main prey of the Great Crested Grebe. This bird eats brine shrimp when molting in salty lakes. On a lake, a black-necked grebe builds a floating cup. A disc covers the nest cup. This nest is found in colonies and alone.

The black-necked grebe, sometimes known as the eared grebe, is a water bird in the grebe family. This bird has grayish-black upperparts, including the top of the head, and a vertical stripe on the back of the neck when it is not breeding. Their eyes are bright in red with brown-eyed hair.

Insects (such as aquatic beetles, dragonfly larvae, flies, and mayflies), crustaceans, mollusks, tadpoles, and a few tiny fish are among its prey. During its fall layover on big alkaline lakes, it may mostly feed on brine shrimp. Insects are the primary source of nutrition for the young. Eats feathers on occasion, like do other grebes.

When breeding, this grebe forms vast colonies, and when not, it forms large flocks.

Also known as the black-necked grebe.

The best time to see these birds in the United States is during the winter season (December to February) and the summer season (June – September).

Distribution of the Eared Grebe in the USA

Breeds from British Columbia, southern Manitoba, and the North Dakota and South Dakota all the way down to California, New Mexico, and northwest Texas.