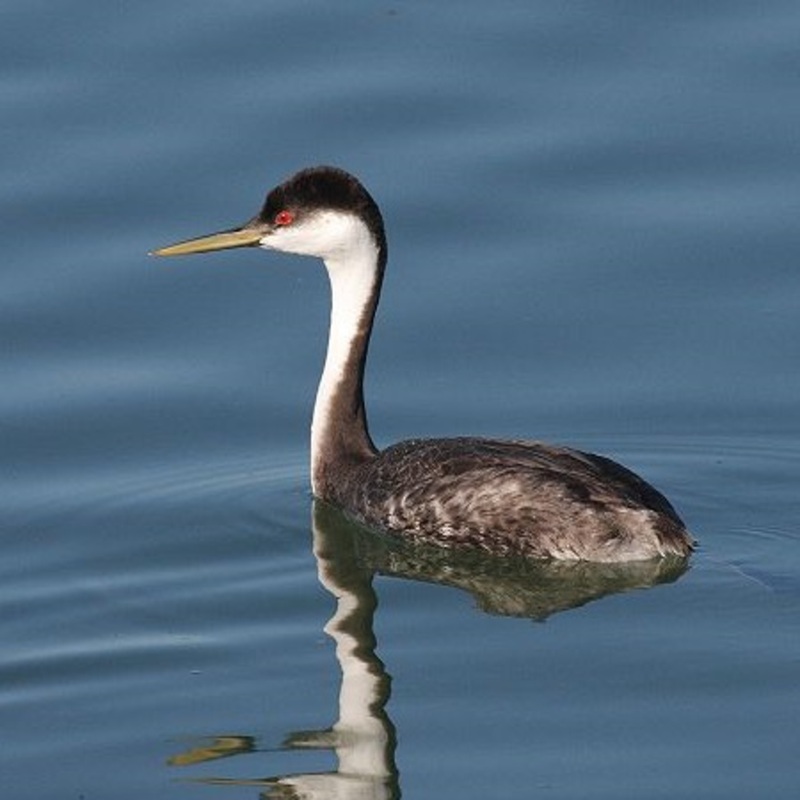 The western grebe, Aechmophorus occidentalis is a grebe species in the family of Podicipedidae. Other names include “dabchick” and “swan grebe”. Fossil western grebes from southwest North America were described as a separate species but were eventually reclassified as Aechmophorus occidentalis lucasi. A recent investigation revealed them to be within the range of modern birds.

The biggest North American grebe. The feet are far back and the tail is short. The ankle and toe joints are particularly flexible for swimming. They are blackish-brown from above and white from the bottom. The Western Grebe has a pale yellow or olive beak and dark red eyes. A white wing stripe shows in flight. Winter is monomorphic sex.

Aechmophorus occidentalis eat meat. It feeds on fish, insects, mollusks, and crustaceans. The Western Grebe is a predator. It dives underwater and spears fish.

The migratory Aechmophorus occidentalis breeds in freshwater lakes with rushes and tules. It lives on prairie lakes in BC and CA, and occasionally in Mexico. A. occidentalis spends the winter in the Pacific.

Only Aechemophorus occidentalis migrate in pairs. When it settles, it spreads out to eat in a loose flock. While this pair nests near other birds on the lake, they grow violent and territorial against other nesting pairs. A. occidentalis courting behavior is complicated. To attract a partner, they use a variety of displays, postures, and cries. No unique hierarchy decides who mates.

The best time to see these birds in the United States is during the summer season (June – September) and winter season (December – February).

Distribution of the Western Grebe in the USA

Breeding range includes British Columbia, Saskatchewan, and Manitoba, as well as California and southwestern Texas. Winters along the Pacific coast from southeastern Alaska to California as well as on Louisiana and Texas Gulf Coasts. Casual to the eastern United States.