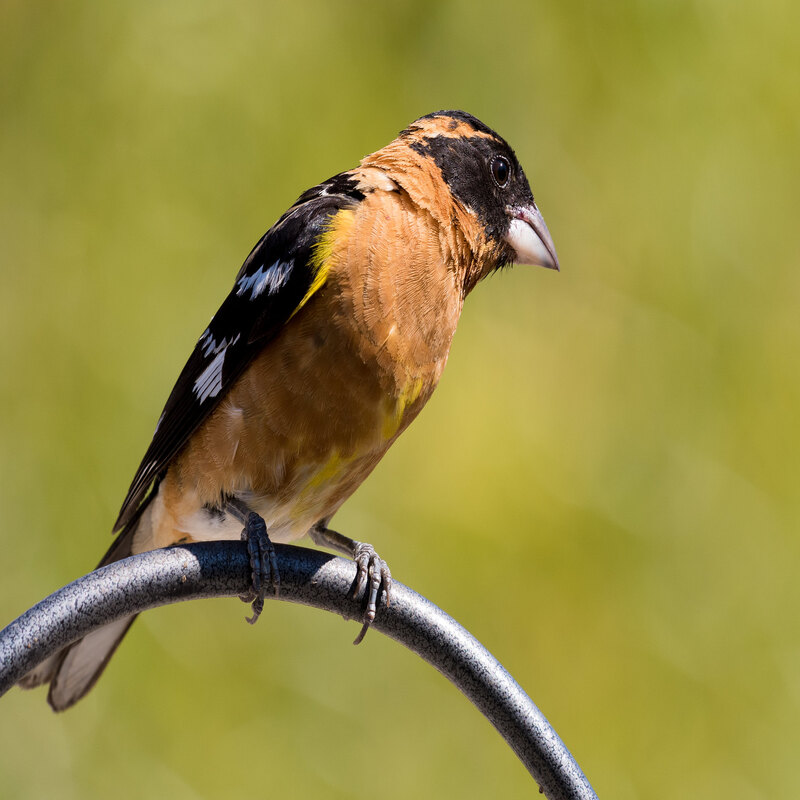 Pheucticus melanocephalus or commonly known as a Black-headed grosbeak is a member of the Cardinalidae like the northern cardinal. These species are also sometimes considered conspecific with rose-breasted grosbeak. They are tame enough to be hand-fed in some areas.

Black-headed grosbeaks can breed with their close relatives, the rose-breasted grosbeaks, to produce offspring (Pheucticus ludovicianus).

The black-headed grosbeak is a medium-sized seed-eating bird that has a large, stocky finch with a black-streaked, orange-brown back and a black head, wings, and tail, among other characteristics. The breasts are orange-brown in color, and the belly is yellow. The white patches on the wings are quite noticeable. Legs and feet are all blacks. The female lacks a black head and throat, and her upper parts are brown streaked with buff streaks, while her underparts are buff streaked with brown.

These birds eat a variety of insects and invertebrates during the breeding season, including grasshoppers and codling moth caterpillars. Their large bill allows them to crack open small fruits like cherries, blackberries, raspberries, strawberries, elderberries, and mistletoe berries.

Black-headed grosbeaks prefer deciduous and broad-leaved evergreen forests, and they prefer to nest in thickets on the edges of open woods, ponds, swamps, and streams, as well as in small trees. They have a wide range of habitat preferences.

Distribution of the Black-headed grosbeak Description in the USA

Pheucticus melanocephalus is found from the Pacific to the Rocky Mountain foothills. These birds spend the winter in Mexico and the rest of the year in the western US and Canada, from Montana to Baja, California. Black-headed grosbeaks can be found from Kansas to British Columbia as well.