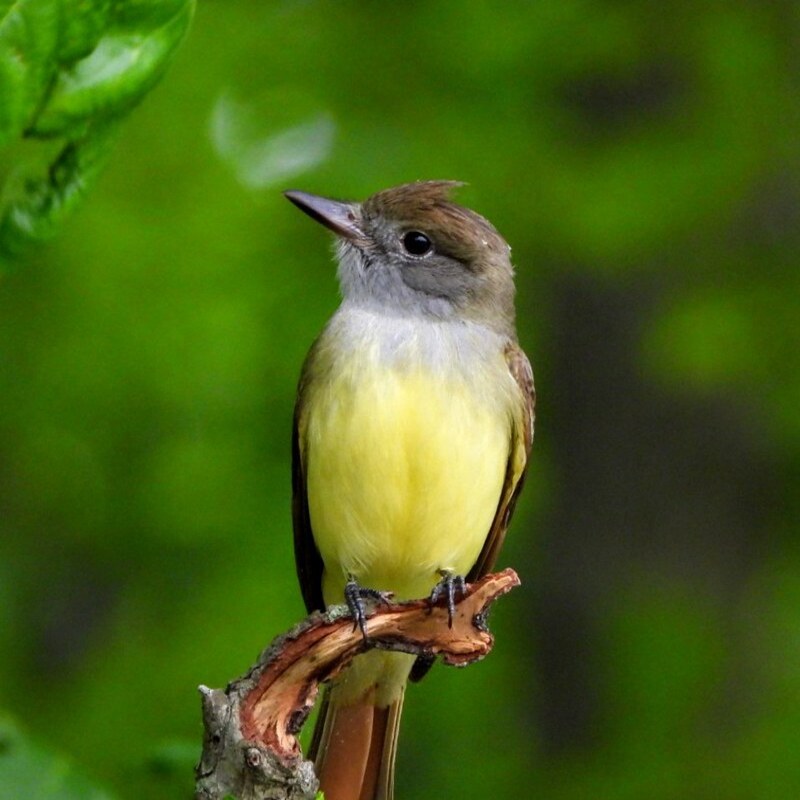 The great crested flycatcher, Myiarchus crinitus is a big insectivorous bird belonging to the family of tyrant flycatchers. It is the most widespread species of the genus Myiarchus in North America, occupying the majority of the continent’s eastern and midwestern regions. It is usually found in the trees and is very rarely seen on the ground.

Great crested Flycatcher is a big flycatcher with colors that are comparable to those of other members of the genus but are brighter. The broad, rounded dark gray head is slightly domed or crested at the top. This species has a large, thick beak that is predominantly black with a broad, pale base. On the head, the gray coloringT is darkest at the crown and gradually lightens and extends into the throat and breast, where it contrasts with the bright yellow belly and bottom. The back is a dark olive color that transitions into dark flight feathers with white edges. The secondary feathers, like the tail feathers, are a vivid rufous color. Legs and feet range in color from dark brown to black. This species exhibits no sexual dimorphism.

Great crested Flycatcher is mostly an insectivorous species but will consume fruits on occasion, particularly during the non-breeding season. This species primarily uses hover-gleaning techniques to steal prey from the foliage’s surface. It frequently forages from a perch high in the green tree canopy, significantly higher than many of its insectivorous neighbors. Butterflies and moths, beetles, grasshoppers and crickets, bees and wasps, flies, and spiders are all common prey items.

Great crested Flycatcher is a forest dweller with a preference for deciduous or mixed-deciduous forests. This species is found in semi-open canopy or forest edge settings. Additionally, urban settings with a dense canopy of trees provide a habitat for this species. Myiarchus crinitus is an obligate secondary cavity breeder that will seek out woods with snags and pre-made cavities during the breeding season.

The great crested Flycatcher is a Neotropical migratory species that travel biannually between North America and Central or South America. As is the case with many birds, they are most active at dawn and dusk and are diurnal, save for nighttime migration. They are swift flyers, catching the majority of their insect prey in flight. They spend most of their time flying or perching near the tops of big canopy trees and are rarely observed on the ground. Myiarchus crinitus is extremely territorial during the breeding season, and both sexes will aggressively pursue or attack intruders of the same or another species.

Distribution of the Great crested Flycatcher in the USA