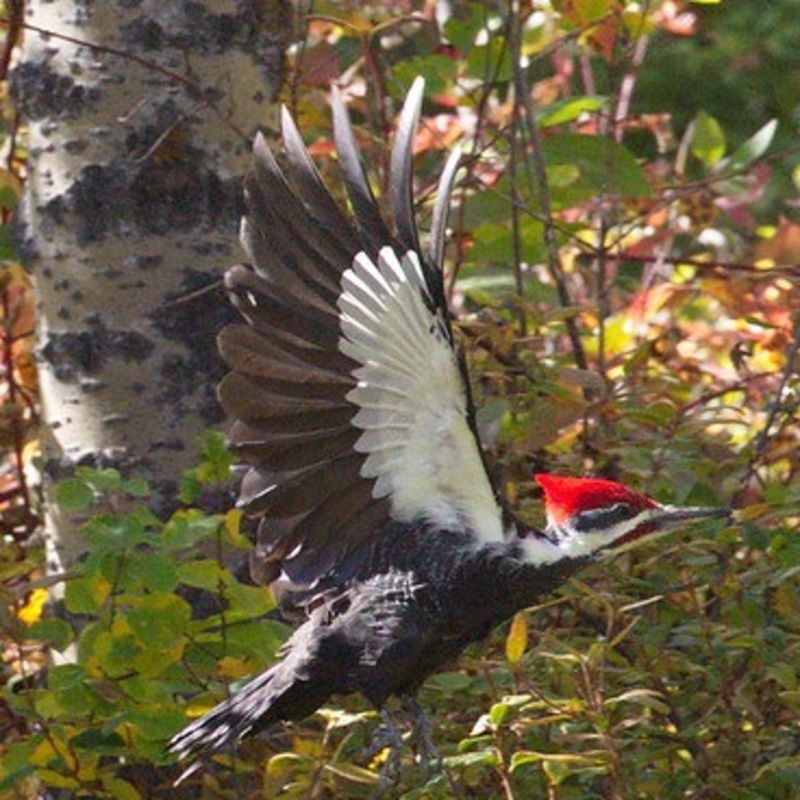 Dryocopus pileatus, commonly called the pileated woodpecker is a large woodpecker that is predominantly black in color and is native to North America. An insectivore, it can be found in deciduous forests throughout eastern North America, the Great Lakes region of Canada, the boreal forests of the United States, and portions of the Pacific Coast. It is the largest woodpecker species that belong to the family of Picidae that still exists in the United States.

Carpenter ants and woodboring beetle larvae are the favorite foods of this woodpecker. It rips wood to reveal ant galleries. That long, pointed tongue with barbs and sticky saliva helps the Pileated Woodpecker catch and remove ants.

A fir forest Nests in mesic areas near streams, choosing stands with the largest basal area, stem density, and crown canopy are the most common habitats of these species. Roost in hollow trees with several entrances as well.

Primarily for vertical climbing; occasionally hops on the ground. Strange on small branches and vines. Strong flyer with a slightly undulating flight; flight is slow but direct. Night roosts in the cavity. During the battle, it chases, calls, flies, and jabs with its bill. In early spring, when courtship activities begin, drumming usually occurs atop a dead tree that resonates sound. Drumming is used to claim land.

Distribution of the Pileated woodpecker in the USA

From Nova Scotia, New Brunswick, southern Quebec, and central Ontario south to southern Florida, and west to forested river bottoms in eastern Texas and southern Oklahoma. The winter range is identical. It is a permanent resident of deciduous and coniferous forests in southern Canada and the United States.