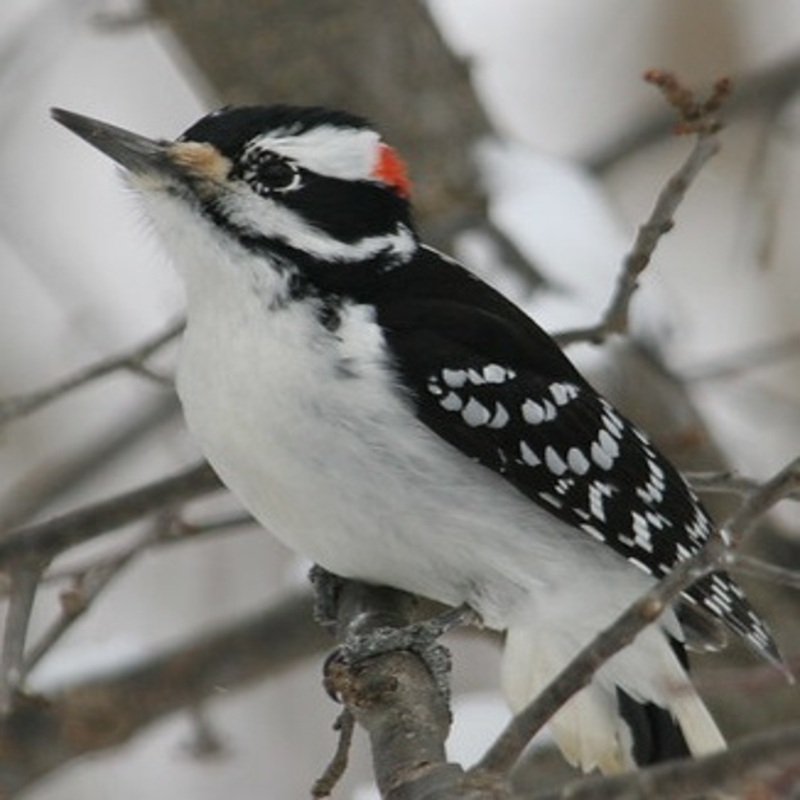 Dryobates villosus, commonly known as hairy woodpecker is a medium-sized woodpecker that is found throughout North America. According to the IUCN, the hairy woodpecker has a population of over nine million individuals in 2003. Some ornithologists classify it as Dryobates.

The Hairy Woodpecker is similar to the Downy woodpecker, but larger (634 versus 914) and with a larger bill. Both have black spots or bars on the outside of their outer tail feathers. This species also belongs to the family of Picidae.

Adults are mostly black, with a white or pale back and white spotting on the wings; the throat and belly vary in color from white to sooty brown depending on subspecies. A white bar is above and below the eye. White outer feathers on a black tail adult males have a red patch on the back of their heads, while juvenile males have a red or orange-red crown.

Insects, particularly gypsy moth caterpillars and pupae, spiders, nuts, seeds, and fruits are included in the diet, and the animal forages in trees, bushes, brush piles, and canes.

Deciduous forests are among the species’ preferred habitats.

These birds forage for insects on trees, frequently turning over bark or excavating to uncover the insects they are looking for. They primarily consume insects, but they also consume fruits, berries, and nuts, as well as tree sap on occasion. They are a natural predator of the European corn borer.

There are 17 subspecies recognized species.

Distribution of the Hairy woodpecker in the USA

This bird, which is native to North and Central America, prefers to live in subtropical or tropical forest ecosystems. There are mature deciduous forests where the hairy woodpecker can be found in the following countries: the Bahamas; Canada, Mexico, Nicaragua, Panama, Saint Pierre, Miquelon, and throughout the United States.