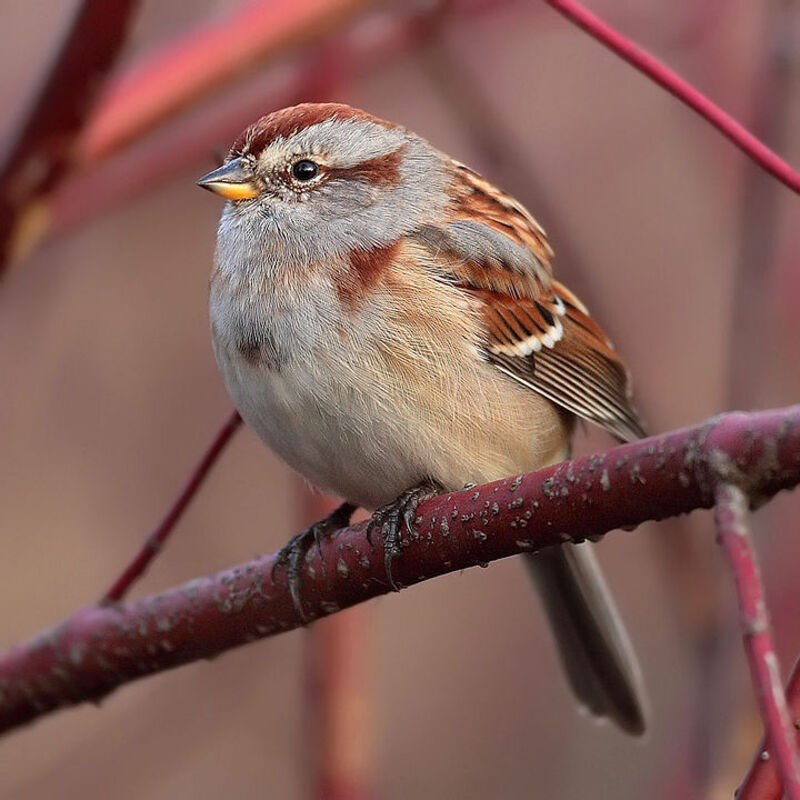 Spizelloides arborea in Latin, the American tree sparrow also known as the winter sparrow, is a medium-sized New World sparrow that can be found in the Northern part of the United States. It belongs to the Passerellidae family.

It had previously been placed in the genus Spizella, but molecular evidence from multiple loci suggested that it should be placed in its own genus.

Americans have a rufous crown and eye-line, dark spot on the breast, long notched tail, dark upper mandible, and yellow lower mandible. With rufous patches on the breast sides and gray head, chin, throat, breast, and underparts. Their wings are brownish-red. Males and females look alike. Adults have to streak on their sides and breast.

This species breeds near the tree line in open scrubby areas with willows, birches, alder thickets, or stunted spruce. Open tundra with scattered shrubs near lakes or bogs. Wildflowers and wetlands provide habitat for them.

This species is territorial during the breeding season. Males sing to claim territories and defend them, while females occasionally chase intruders. An area’s interior is used the earliest in the day, with activity spreading to its perimeter later. They do not actively defend winter territories. In the winter, they form foraging flocks with dominant individuals.

The American tree sparrow is also known to be called a Winter sparrow.

Distribution of the American tree sparrow in the USA

In Alaska, the Yukon and Northwest Territories, northern Manitoba and Ontario, Labrador, and northern Quebec, American tree sparrows breed. Their winter range includes all of southern Canada, except the western 250 miles, the southern 450 miles.