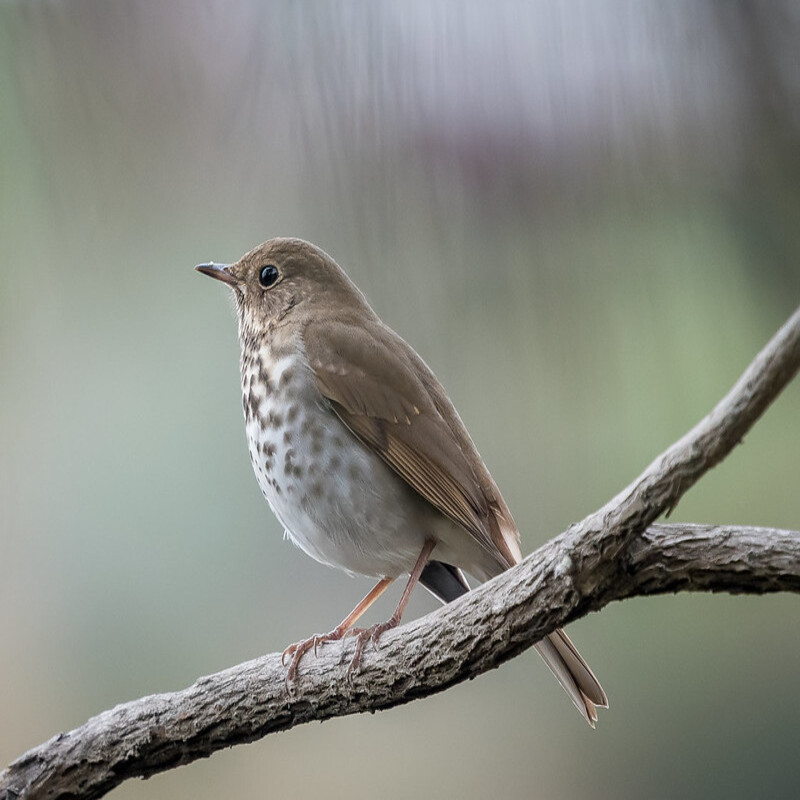 A conspicuous white eye-ring, an indistinct whitish bar above the lores, a darkly speckled breast and sides of throat, olive-brown to gray-brown dorsal coloring, a white ventral side with buffy to grayish flanks, and various amounts of reddish wash on flight feathers and tail. This thrush has no evident sexual dimorphism.

It feeds on insects, small animals, and fruits of trees, shrubs, and herbaceous plants. They scavenge from leaves while perched or hovering or probe into the ground or dead wood for nourishment. The amount of meat and vegetable material in Hermit Thrush diets varies. They eat more animal stuff in the spring and summer and more plants (particularly berries) in the fall and winter.

Hermit thrushes may be differentiated from other similar thrushes in the field by their singing and tail- and wing-flicking. When a bird lands, it may rise and lower its tail swiftly. It also produces a characteristic “tchup” call. When perched, hermit thrushes swiftly stretch their wings from their bodies before returning them to their sides.

The best time to see these birds in the United States is during the Winter season (December- February) in the Southern part and the Spring season (March-May) and during the Autumn season (September – November) in the Northeastern part.

Distribution of the Hermit Thrush in the USA

They breed in northern hardwood woods, boreal and highland coniferous forests across North America, and in both North and Central America in the winter. They breed across the western and northeastern US, Alaska, and parts of southern Canada. The winter northern limit in the United States extends from southern Massachusetts to southern Ohio, Indiana, Illinois, Arkansas, Oklahoma, and Texas. Their winter range extends from the Gulf of Mexico south to Oaxaca. They are year-round residents of New Mexico and eastern Arizona.