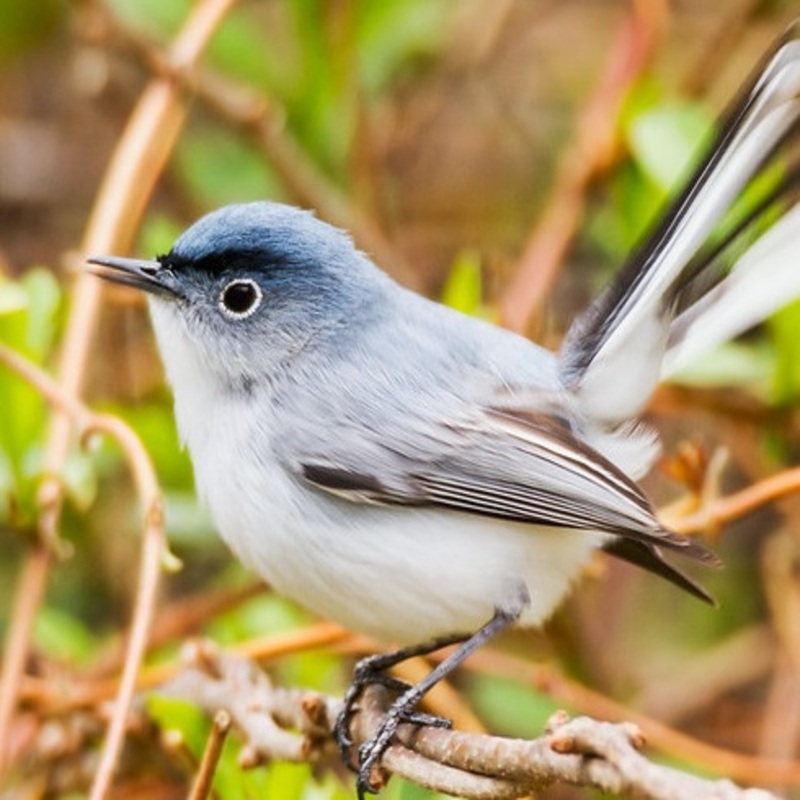 Polioptila caerulea, sometimes known as the blue-gray gnatcatcher, is a very tiny songbird that is endemic to North America. The Blue-gray Gnatcatcher is the most frequent species of gnatcatcher found in North America, accounting for almost a quarter of all species. It may be found throughout the eastern two-thirds of the United States as well as the southeastern parts of Canada. When compared to the female, the male may be identified by his strong, black eyeliner, whilst the female does not.

Blue-gray Gnatcatchers are tiny birds with rather long tails, which distinguishes them from other species. They are bluish-gray on top and white on the bottom. The hue of the wings’ bases merges into the black coloration at the tips of the wings’ tips. The tail has a dark color with white streaks scattered throughout. Around each eye, there are conspicuous thin white rings that are visible.

Gnatcatchers are mostly interested in tiny insects and spiders. As they go up and down through the outer branches of trees or bushes, they are on the lookout for food. Their favorite meals are as follows (in descending order of amount consumed): Homoptera (cicadas, aphids), Hemiptera, beetles, moths, butterflies, flies, ants, bees, wasps, and succulents, spiders.

Birds of prey such as Gnatcatchers thrive in a diverse range of woodland environments, ranging from shrublands to mature forests. They tend to stay away from coniferous woods and congregate mostly around the margins of habitats. Floodplain forests, lakeside habitats, pinyon-juniper woods, and dry, subtropical shrubs are just a few of the environments that they may be found.

The Blue-gray Gnatcatcher loves to hop from place to place, either on the ground or along tree branches, since it has short mothlike flights. Posturing with the tail elevated and loud bill slapping are examples of aggressive behavior in a crow. Gnatcatchers are territorial, as seen by their responses toward intruders of the same sexual orientation. When the first brood of the summer interferes with the upbringing of the second brood, parents frequently attack the fledglings from the first brood.

Distribution of the Blue-gray gnatcatcher in the USA

The Blue-gray gnatcatcher may be found across much of the United States east of the Mississippi River, with the exception of the state of Maine. It may also be found in Mexico, Cuba, Texas, Oklahoma, Nevada, Utah, and New Mexico,  among other places.