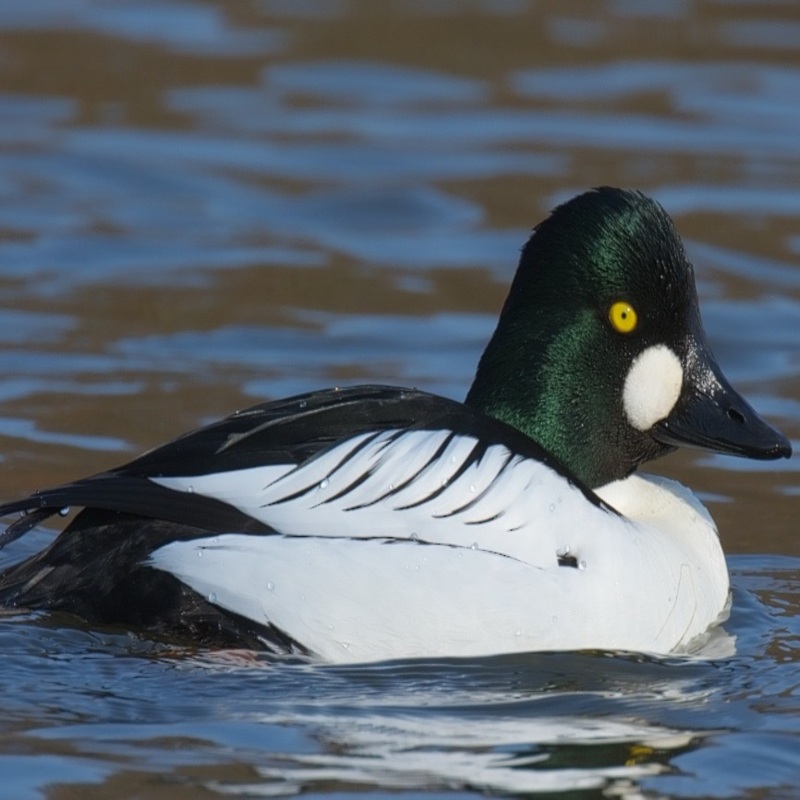 The common goldeneye (Bucephala clangula) is a medium-sized sea duck belonging to the genus Bucephala, the goldeneyes. It is most closely related to the Barrow’s goldeneye. The genus name comes from the Ancient Greek boukephalos (“bullheaded,” from bous, “bull,” and kephale, “head”), which refers to the bufflehead’s bulbous head shape.

Medium diving duck, black upperparts with white stripes, white underparts. Green-black head with a white circular patch between yellow eyes and a dark gray bill. Dark wings with big white patches that are visible in flight. Yellow is the color of the legs and feet.

During the breeding season in northern boreal lakes, common goldeneyes feed primarily on water insects. They subsist on fish, crabs, and mollusks in their winter ranges. Additionally, they may take some seeds and tubers.

The Common Goldeneye nests in mature forest tree cavities – and in northern places, rock cavities – near wetlands, lakes, and rivers. It loves small, clear lakes with little emergent vegetation in most locations.

Goldeneyes then pair up on their winter grounds, as is customary for ducks. In winter and spring, the males put on a stunning and complicated courtship display that includes 14 separate behaviors; typically, around four males show to each female. Throwing the head back, kicking the water, and calls are all examples of these behaviors.

Distribution of the Common Goldeneye in the USA

They are found in boreal forest lakes and rivers throughout Canada and northern the United States, as well as in Scotland, Scandinavia, the Baltic States, and northern Russia. They are migratory, spending the winter in more temperate latitudes in protected coastal areas or open inland waterways.