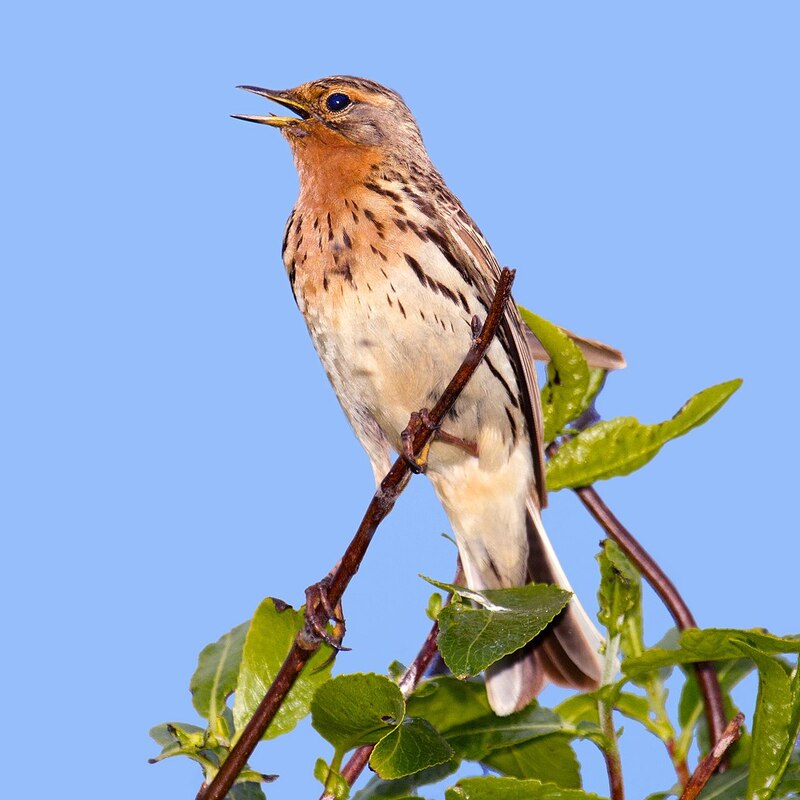 The Anthus cervinus, also known as Red-throated pipit is a small passerine bird in the family of Motacillidae. These birds are known to be migrated in a long-distance moving in winter to Africa, south and east Asia, and the west coast of the United States.

Brown-streaked upper parts and heavily streaked white underparts distinguish this medium pipit. The color of the face, chin, throat, and upper breast are orange-brown. The color of the crown is pale brown. Two white bars are visible on the brown wings. The tail has a white edge.

It subsists on insects and seeds. Forages for food in short grass by crawling and walking in a crouching position, frequently darting after insects; wags tail during pauses in foraging activity.

They prefer to breed in wet depressions with bushes to perch on when the terrain is hilly and rolling, as is the case with red-throated pipits. When they breed in Scandinavia, they do so on bare mountain tundra, willow-zone swampland, and grassy openings in short, upland birch forest.

Red-throated pipits, like other Anthus species, have cryptic habits and plumage. They forage on the ground and perch on bushes, small trees, and rocks. When disturbed, they flush from the ground and fly in erratic, jerky movements. When agitated, they stand and pump their tails.

Distribution of the red-throated pipit in the USA

This species breeds in far northern Europe and Asia, as well as northern Alaska and in winter, in Africa, South and East Asia as well as along the western United States coast.

The red-throated pipit can be found in the following states in the United States – California, Oregon, and Washington.