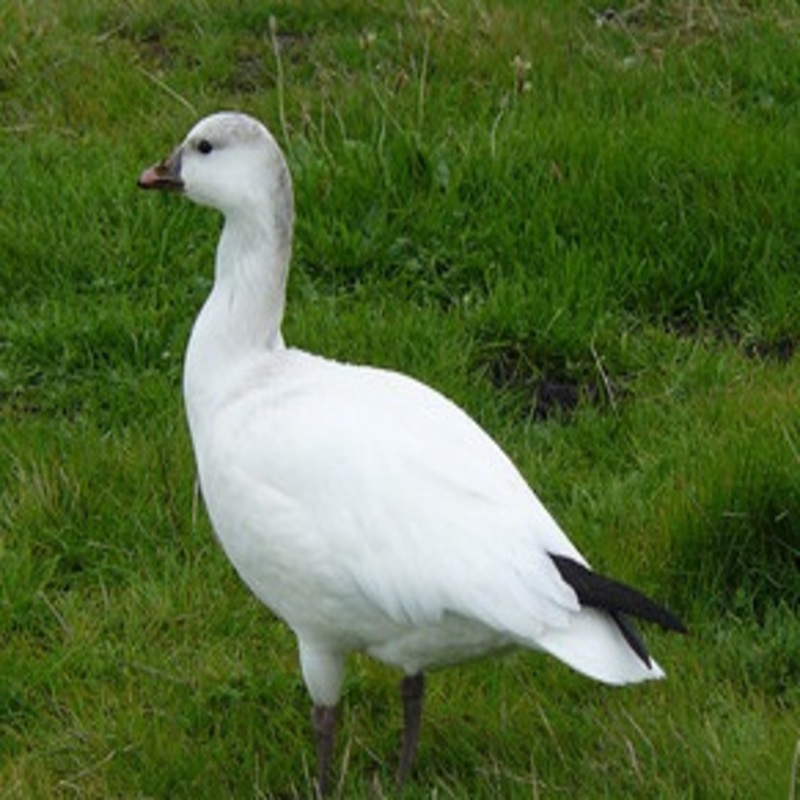 Ross’s geese, Anser rossii in Latin, is a little white bird with black wingtips and a short neck. It is the smallest of the three North American “white geese.” It resembles a white-phase snow goose but is roughly 40% smaller. Additionally, the snow goose’s bill is thinner in proportion to its body and it lacks “black lips.” The dark phase is exceedingly uncommon.

Small white goose with black primary feathers and a short red-orange beak with a gray base. Legs and feet in a red-orange hue.

Ross’s Geese feed on plant material and only seldom on insects. They feed mostly on grass and sedge roots when they arrive on mating grounds, just as the tundra begins to thaw. They feed on cottongrass, birch, and sedge shoots throughout the season.

Ross’s Geese breed exclusively in Canada, breeding in dry, low-arctic tundra, typically near regions with abundant sedges and grasses, and frequently on islands of dwarf birch and willow in tiny lakes.

Ross’s stay at marshes and agricultural fields during the fall migration, where they eat barley, wheat, field peas, and wheatgrass. Ross’s Geese breed exclusively in Canada, breeding in dry, low-arctic tundra, typically near regions with abundant sedges and grasses, and frequently on islands of dwarf birch and willow in tiny lakes.

Distribution of the Ross’s Geese in the USA

Breeds on the tundra in far northern Canada’s coastal regions and on Southampton Island in Hudson Bay. Winters in California and, to a lesser extent, the lower Mississippi Valley, the east coast, and the Gulf Coasts of Texas, Mexico, and the Yucatan Peninsula.