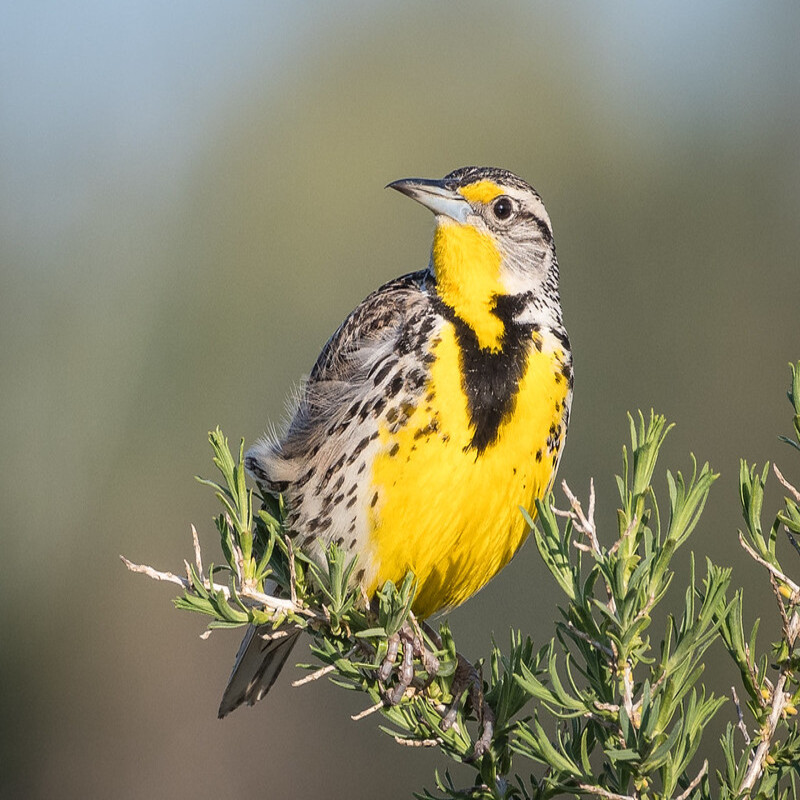 The western meadowlark, Sturnella neglecta is a medium-sized icterid with a wingspan of around 8.5 in (22 cm). It nests on the ground in western and central North America’s broad grasslands. It is mostly an insect eater, but may also consume seeds and berries. The western meadowlark has characteristic watery or flute-like cries that set it apart from the closely related eastern meadowlark.

It’s brown and black on the back and wings, and it has a brilliant yellow breast with a black V on the front. During the winter, the colors of the meadowlark may appear a little duller. It has a pointed bill that is rather lengthy.

The meadowlark’s primary food source is insects such as caterpillars and grasshoppers, however, it may occasionally consume seeds..

Meadows, plains, prairies, and other open grasses are habitats for the western meadowlark.

The male meadowlark comes a few weeks before the female to the mating place. Its likes to perch on fences, poles, and wires in order to stake out and protect its area. Typically, a male’s home range is around six or seven acres. If another male attempts to infiltrate his domain, he may engage in combat with the invader. Meadowlarks engaged in combat lock their feet together and peck at one another with their beaks. The western meadowlark claims territory with its unique song and cry.

Distribution of the Western Meadowlark in the USA

Breeds in British Columbia, Manitoba, northern Michigan, and northwest Ohio, as well as in Missouri, middle Texas, and northern Mexico; has recently expanded eastward. Winters throughout a large portion of its breeding area, from northern British Columbia to southern Utah and Arkansas.