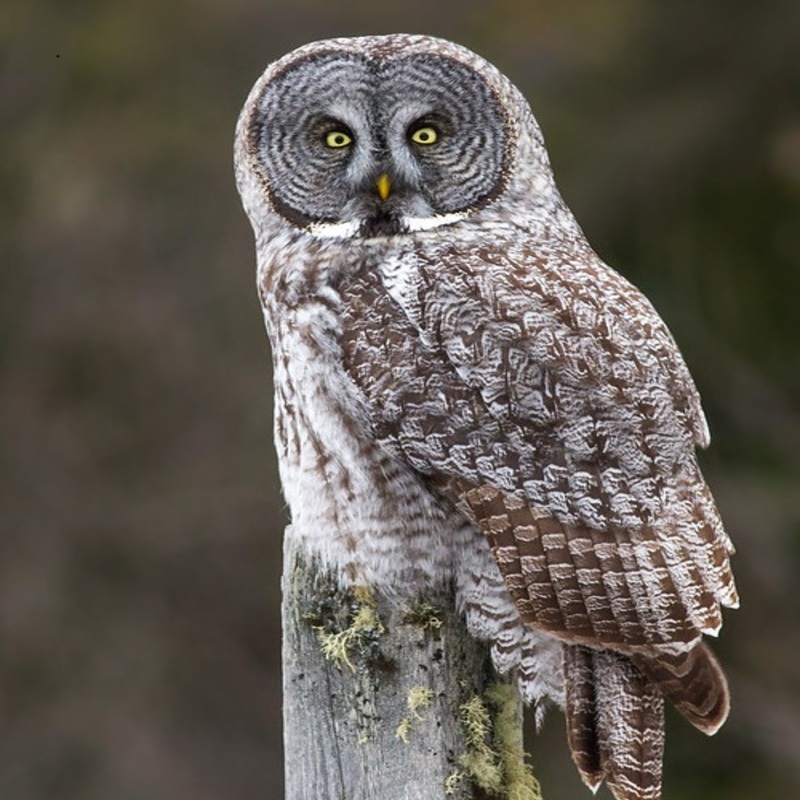 When measured in length, the great grey owl or known in Latin as Strix nebulosa is the largest owl in the world. It is the world’s largest species of owl, and it is the world’s largest owl by weight. Its range extends over the Northern Hemisphere, and it is the only species of the genus Strix in the family of Strigidae to be found in both the Eastern and Western Hemispheres, making it unique among its contemporaries.

The Great Gray Owl is Alaska’s tallest owl, at 24-33 inches tall with a wingspan of 54-60 inches. It has a bigger, grayer head and no ear tufts. Yellow bill and eyes face disk with two prominent gray concentric circles. The feathers on the disk assist route sound to the secret ear holes. Like the owl’s skull, huge bony cups surround the ear holes.

Hunting by perching on a tree overlooking a field or open region. The owl’s excellent hearing allows it to locate prey even under two feet of snow or in tunnels. When the owl finds a rodent, it softly glides down from its perch and grabs it with its keen talons. In the snow, the owl’s spread wing feathers leave fresh “plunge marks.” Some locations have no signs of great gray owls at all.

Great gray owls live alone. The male prepares for breeding and nesting by feeding the female and flying displays. They do not reproduce, however, egg production is linked to food availability. When mice are plentiful, owls lay more eggs and hatch more pups. It is found in Northern Hemisphere coniferous forests and will leave its territory if food is scarce. Strix nebulosa have excellent night vision and hearing. Both the great horned owl and the great gray owl are threatened by ravens and other small birds.

Various other names for this owl include the Phantom of the North, cinereous owl, ghostly owl, Lapland owl, spruce owl, bearded owl, and sooty owl, among others.

Distribution of the Great gray owl in the USA

Northern Minnesota and Wisconsin are home to Great gray owls. In addition, they breed from northern Yukon south to northern Manitoba, northern Ontario, and central California. Winters in the breeding range, occasionally migrating south to the northern tier of States.

The Great gray owl can also be found in the following states in the United States – Idaho, Oregon, and Washington.