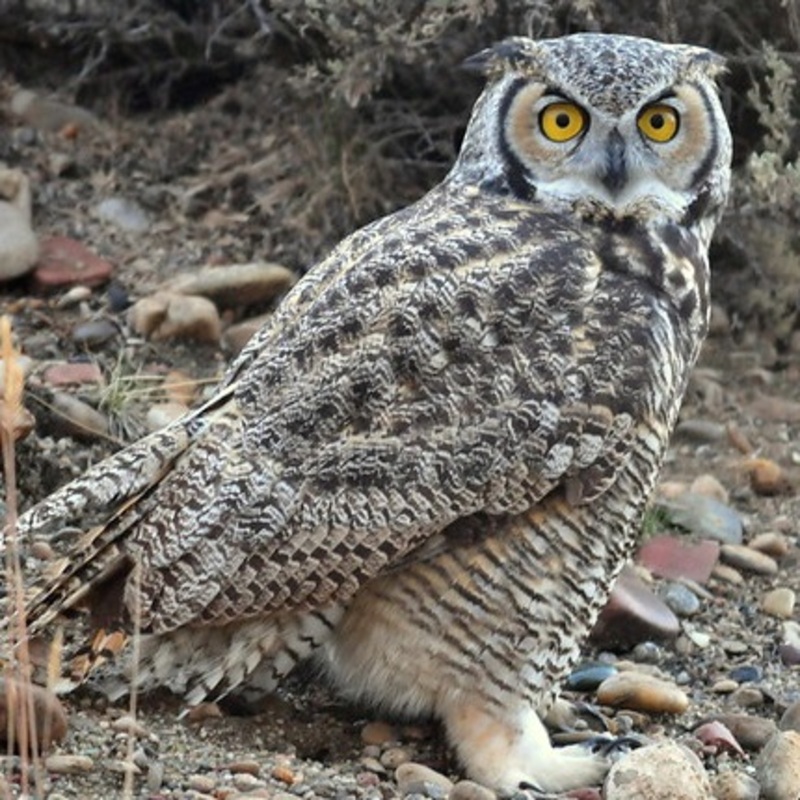 Bubo virginianus, the great horned owl is a big owl native to the Americas. It is the most extensively distributed true owl in the Americas and is highly adaptable. Aside from rabbits and hares, it eats rodents, birds, reptiles, amphibians, and invertebrates. The great horned owl is often compared to the Eurasian eagle-owl (Bubo bubo), a closely related species that fill the same ecological niche in Eurasia, and the red-tailed hawk (Buteo jamaicensis), a diurnal ecological equivalent. This owl is one of North America’s earliest nesters, frequently weeks or months before other raptors in the family of Strigidae.

Great horned owls, like other owls, have rounded faces and forward-facing eyes for binocular vision. Their heads have horn-like feather tufts. This helps with camouflage. Their throats are marked by a white spot. Their underbelly is white with brown and black bars. They have a white or tan bill. Their back is a darker shade of black and brown. Their eyes are various shades of yellow.

They are carnivores that feed on terrestrial vertebrates. Their diet varies depending on prey availability. These predators eat lagomorphs and mice. Smaller great horned owls rely on smaller prey such as immature rabbits, rodents, and insects in the Southwest. In fields and deserts, they probably eat rodents and insects.

Distribution of the Great horned owl in the USA

Great horned owls are native to North America and Central and South America. Their latitude range is 68 degrees north (around Alaska’s northern tip) to 54 degrees south (near the southern tip of Brazil).