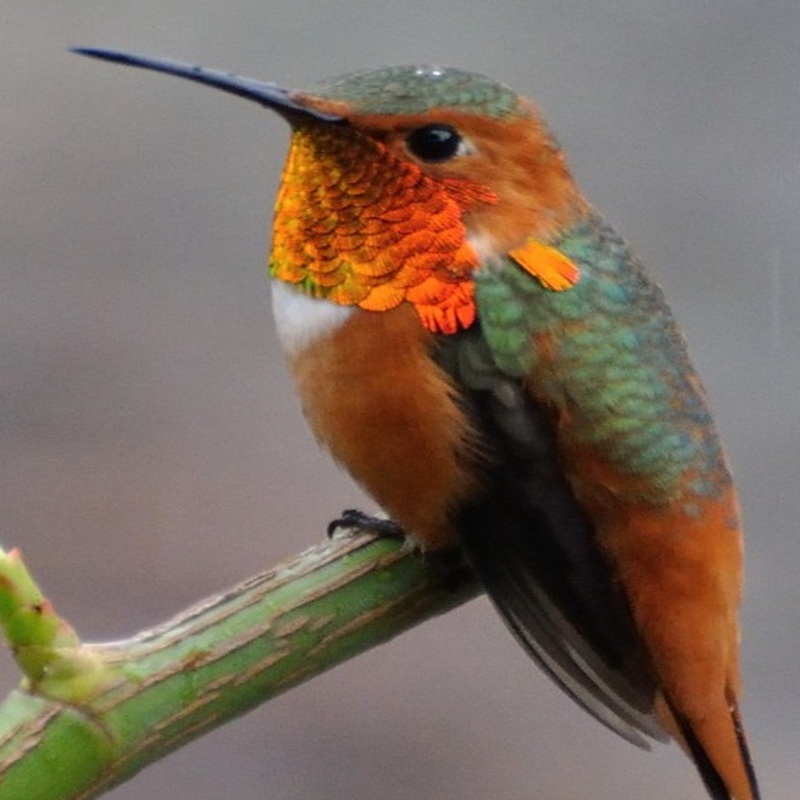 It is a tiny hummingbird that may be found throughout the Americas and South America. These birds are renowned for their remarkable flight abilities, which allow them to travel more than 2,000 miles (3,200 kilometers) during their migratory transits. Selasphorus is a genus that has seven species, each of which is unique. It is around 8 cm (3.1 in) long and has a long, straight, and thin beak.

White breast, greenish back, and crown of mature male rufous The back might be shiny bronze-green. The pileum is bronze-green, while the gorget is orange-red. Shiny metallic crimson across the chin and throat. Long, straight, thin, black or dark brown bill The feet are dark. The female rufous has a metallic bronze-green back and a duller pileum than the male. The female’s chin, neck, and breasts are all dull white.

The Rufous Hummingbird feeds on flies, ants, small beetles, wasps, and other insects. Its main energy source is nectar. It also eats sap from the holes created by Red-naped Sapsuckers. It feeds on honeysuckle, crimson sage, horsemint, and black locust nectar. This hummingbird is drawn to red and tubular blooms, preferring flowers that are spaced apart to allow for wing beats.

This species breeds in forests, seed-tree harvest units, riparian shrub, and spruce-fir environments. It spends the winter in flowery areas. From there, it migrates to lowland streambeds, foothill brushlands, seashores, and highland meadows.

The Rufous Hummingbird is solitary. The male rufous typically creates and protects its own area collecting nectar. The male protects his area to mate. It will dive, pursue, and claw its opponent away. The combat is generally in midair. They tumble and fall to the ground trying to get free when they claw and fly at each other.

Distribution of the Rufous hummingbird in the USA

When it is not breeding, the Rufous Hummingbird may be found in western and coastal North America. During the winter, it migrates to Mexico.