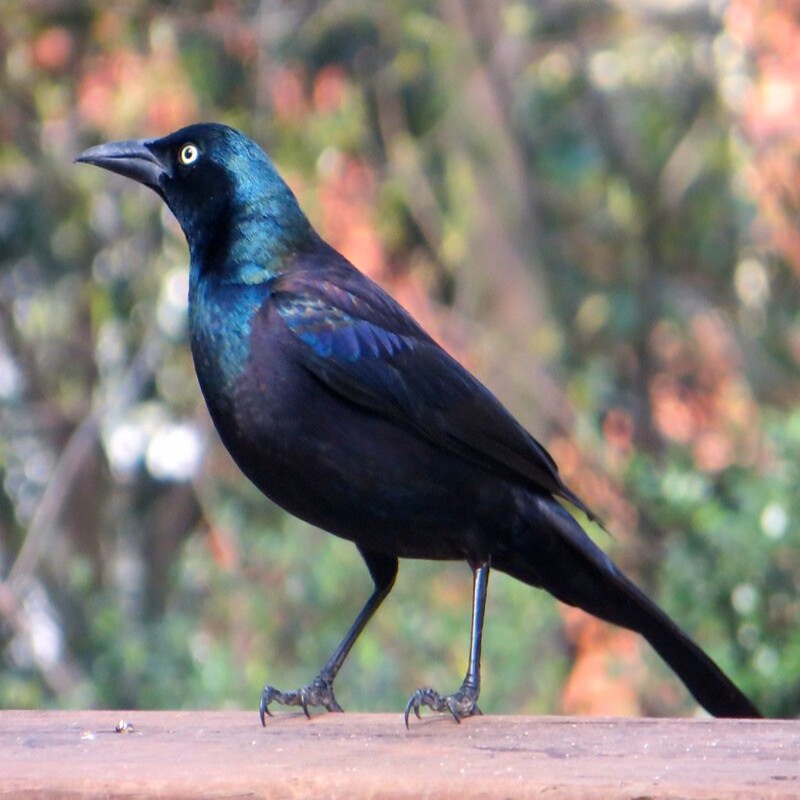 Quiscalus quiscula is a big icterid found across North America. Carl Linnaeus named three subspecies of the common grackle in 1758. Adult common grackles have a long tail and a black beak. Male adults, notably, have iridescent heads. Common grackles are located east of the Rocky Mountains.

These are medium-sized blackbirds. Their black plumage is lustrous and shiny. Its bluish-blue or purple-blue heads, necks, and breasts are lustrous. However, common grackles vary in hue across North America. In New England and the West, the subspecies are bronze-colored. The body is purple east of the Allegheny Mountains, and the feathers are greenish. Graceless is black with golden eyes. Long, keel-shaped tails.

This species an opportunistic forager, following plows in quest of grubs and even eating human rubbish. Adults steal earthworms from eating robins. Foraging on the ground is preferred by grackles, but they also use trees and plants.

Crows are sociable. Non-incubating grackles roost together at night during the mating season. They include red-winged blackbirds, European starlings, and brown-headed cowbirds. Breeding pairs nest alone or in colonies of up to 200. Although gregarious birds, grackles attack each other. They bite, peck, scrape and fly toward other birds. These birds also eat other birds’ eggs and nestlings as well as adult house sparrows. Grackles are alone around the nest. Pairs crowd, pursue, or dive at predators, including people. A flock of the aforementioned species.

Distribution of the Common Grackle in the USA

Breeds across North America east of the Rocky Mountains and south of the tundra, albeit it is found only during the summer months in the northern sections of its range. From southern New England and Minnesota south to the Gulf Coast, this species is a resident.