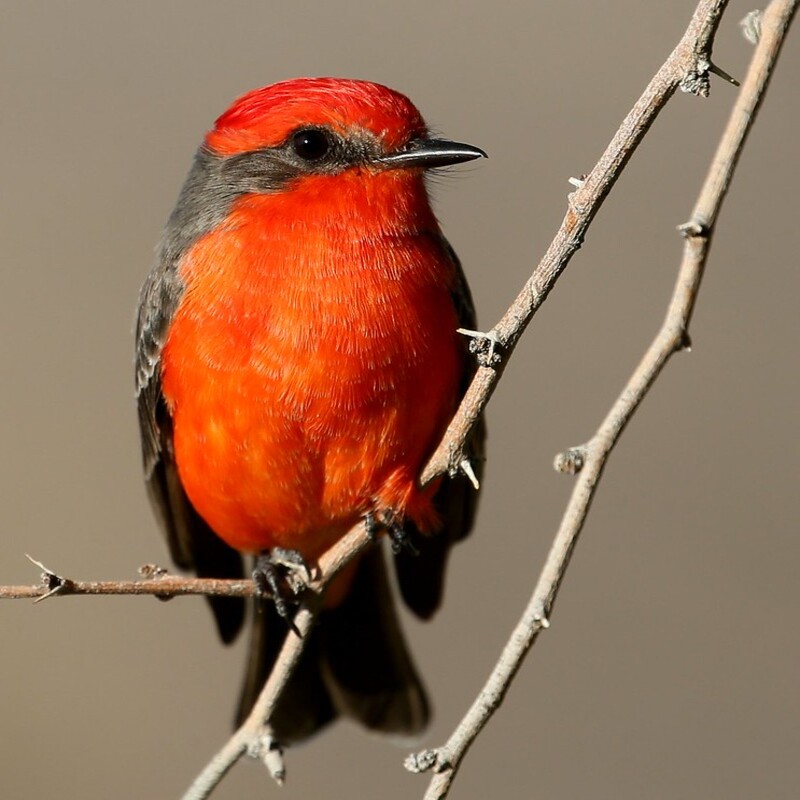 The vermilion flycatcher, Pyrocephalus obscurus is a tiny passerine bird found in South America and southern North America that belongs to the tyrant flycatcher family. Because of its vermilion-red coloring, it stands out among the otherwise drab Tyrannidae. Males have a vivid red crest, breast, and underparts, as well as brownish wings and tails. Females lack the bright red color and might be difficult to distinguish—they may be mistaken for the Say’s phoebe. The song of the vermilion flycatcher is a pit pit pit.

Flycatcher with gray-black upper parts and scarlet-red head, throat, and underparts. The eyeliner on her face is heavy and black. Wings and tail are gray-black, with a small white tip on the tail. The female has gray-brown upperparts, white underparts with brown streaks, and a pale to dark salmon belly and vent.

Vermillion flycatchers mostly feed on flying and ground insects, as well as other arthropods. Grasshoppers, honeybees, beetles, and crickets are their favorite prey.

Vermillion flycatchers don’t spend much time on the ground. They are diurnal and, like other flycatchers, are notable for sallying from a perch to catch prey in mid-flight. There is no information on sleeping, roosting, or sunning. Both males and females preen regularly during the day, and they have been observed wiping their bills on branches to clean them after feeding.

Distribution of the Vermilion flycatcher in the USA

This species breeds from southeastern California to central Texas and then south through Mexico and into the tropics. It spends the winter in the southern half of its breeding area, but it can be found as far east as the Gulf Coast, from Mexico to Florida.

The Vermilion flycatcher can be found in the following states in the United States – Arizona, Georgia, Louisiana, Mississippi, Nevada, New Mexico, and Oklahoma.