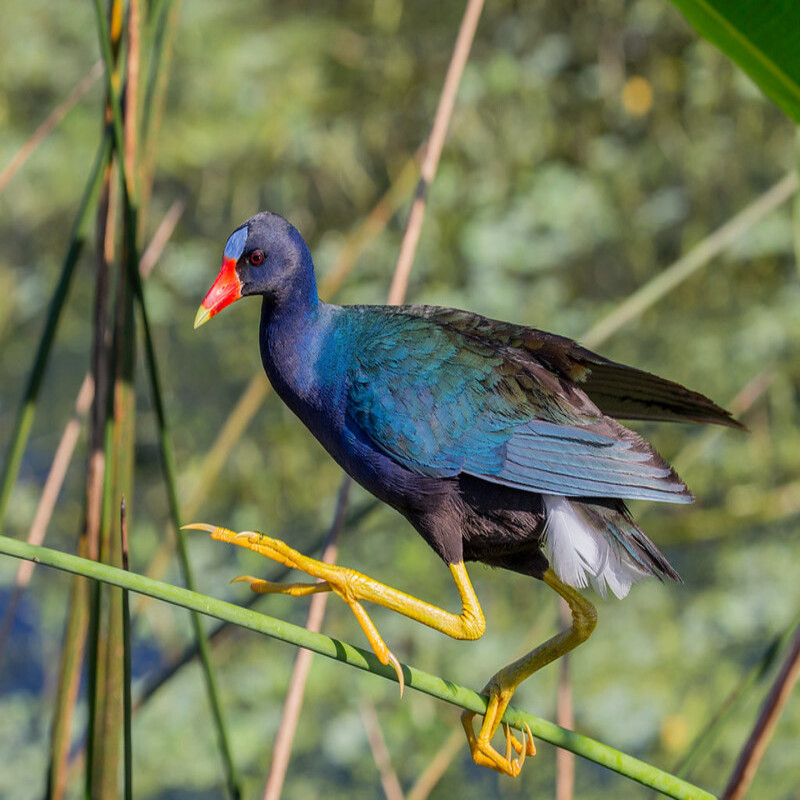 Purple gallinule, Porphyrio martinicus is a genus of swamphens. It is a member of the order Gruiformes, which also includes cranes, rails, and crakes. Purple gallinule is a rail species, belonging to the Rallidae family. Locally, it is referred to as the yellow-legged gallinule. Martinica is a particular epithet that means “of Martinique.”

A medium-sized marsh bird resembling a chicken with purple-blue upperparts and iridescent green, deep blue underparts. The forehead is pale blue, while the bill is crimson red with a yellow tip. White coverts on the under tail are present. Yellow legs with extremely long toes.

Purple gallinules are omnivores that eat on the ground. Their diet includes a diversity of plant and animal materials. They eat seeds, leaves, and fruits of aquatic and terrestrial plants, as well as insects, frogs, snails, earthworms, and fish.

Swamps, marshes, and ponds are new. Throughout North America, they are typically found in large marshes with motionless or slowly moving shallow water, dense marsh cover, and floating vegetation. In the tropics, they can also be found in tiny ponds and ditches. Individuals may stopover in unusual settings, including cities, during migration.

Purple Gallinules forage close to the water’s edge, where they maneuver deftly across muddy edges and among aquatic vegetation. They hunt similarly to domestic chickens, slowly wandering through the grass with their necks outstretched and pecking at fruits and tubers.

Distribution of the Purple Gallinule in the USA

Found in the southern Atlantic and Gulf states, as well as infrequently as far north as Maine, New York, and Wisconsin, and south throughout the West Indies and coastal portions of Mexico, Central America, and northern South America, all the way to Brazil.