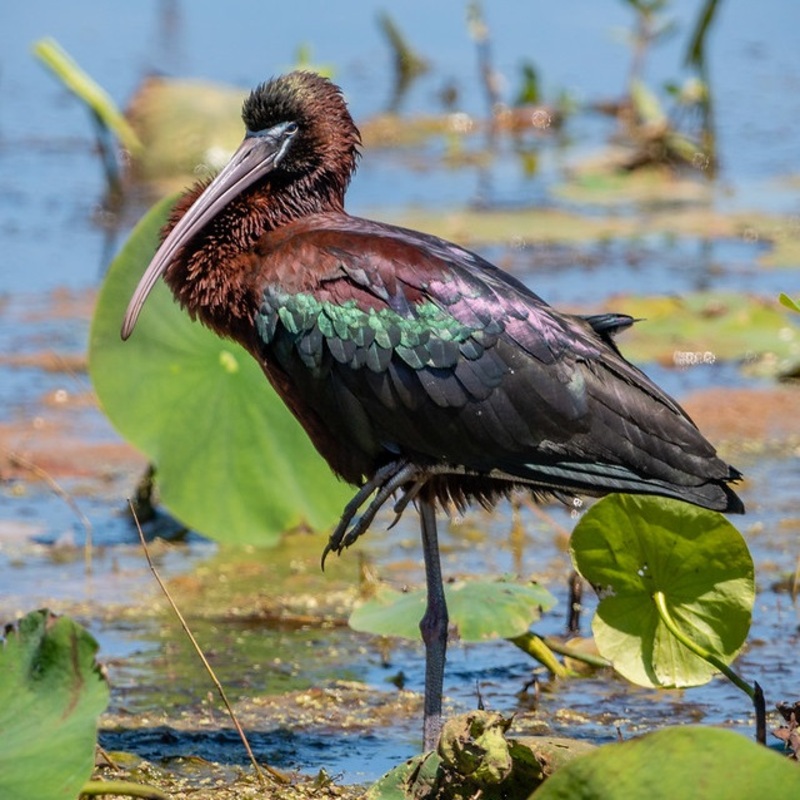 The white-faced ibis, Plegadis chihi is a Threskiornithid wader. This species nests among shrubs or low trees in wetlands. It breeds in western North America, southern Mexico, southeastern Brazil and Bolivia, central Argentina, and along the coast of central Chile. Its winter range includes southern California and Louisiana as well as its breeding range.

White-faced ibises hatch with naked undersides and scant brown or black down. They lose their down and acquire green and purple-colored feathers after two weeks. Adults are considerably taller than children. Black or maroon adult with dark green reflections on the underside. The head, neck, upper back, wing-coverts, and underside become chestnut during mating season. The flying feathers are metallic green in both breeding and nonbreeding seasons.

White-faced ibises eat by probing the substrate for tiny animals. They feed in groups of up to 1000. They eat in shallow water (less than 20 cm) and in moist regions surrounding water bodies. They eat insects, crustaceans, spiders, snails, leeches, and amphibians. Snails and slugs consume 55-90 percent of the food consumed.

White-faced ibises are distributed worldwide. They like fresh and saltwater marshes with plenty of rushes and sedges for breeding, food, and shelter. These birds inhabit flooded meadows and fields, as well as ponds and rivers. Rainy conditions are necessary for both feeding and breeding, restricting their range and affecting migratory patterns.

They are sociable and migratory. If a foraging area becomes too dry, they will move on. White-faced ibises travel far to obtain food. They fly at a speed of 48-53 km/h, often in a V formation with other birds. When it’s hot outside, parents will shelter their babies from the sun in the nest to prevent heatstroke. These sociable birds live in big groups.

The best time to see these birds in the United States is during the winter season (December to February) and other parts are during the summer season (June- September).

Distribution of the White-faced ibis in the USA

White-faced ibises are widespread, having two different ranges: North and Middle America, and South America. North and Middle America include much of the western and midwestern United States, as well as most of Mexico. Breeding ranges extend from southern Canada to Nebraska. During the non-breeding season, all species except those located in California, Texas, Louisiana, and central Mexico move south. The South American white-faced ibises do not migrate.