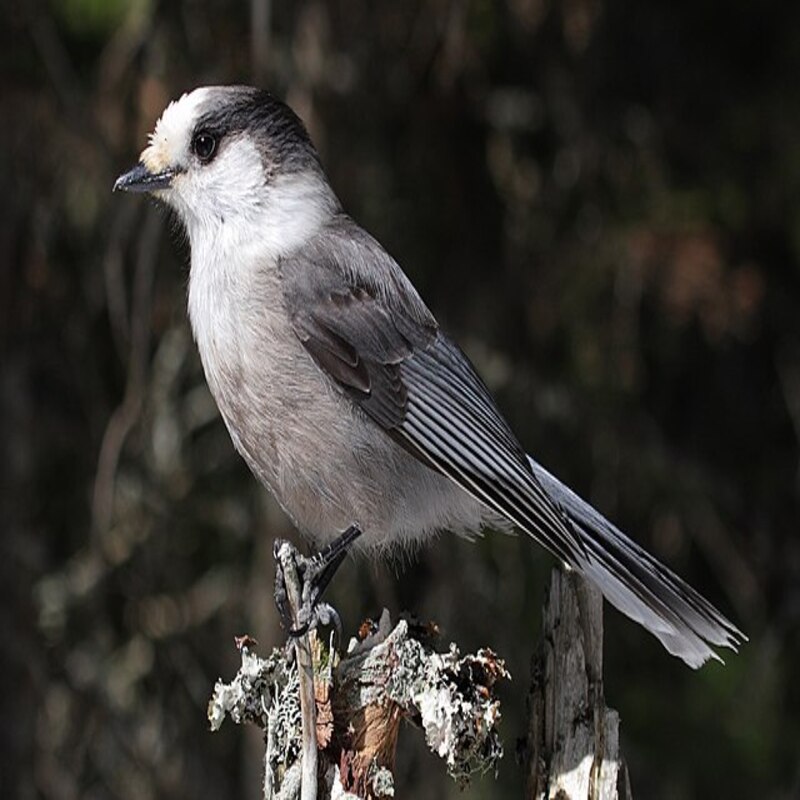 The Canada jay, Perisoreus canadensis is a passerine bird of the Corvidae family. Canada jays live year-round in coniferous woods, relying on food stored around their range throughout the summer. The birds establish monogamous mating couples, each with a third young from the previous season.

The sexes are the same size and color: dark and light gray, black, brown, and white. Adults of this short-billed species have black legs and white auriculars (cheek feathers that protect the ear canal). Gray jays are smaller and darker than ordinary blue jays. These birds are significantly lighter in hue than birds from the Rocky Mountains.

Birds and small animals are eaten by gray jays, along with berries and arthropods (including shrews, voles, and juvenile bats). They seize insects and destroy wasp nests. Gray jays forage in shallow water for tiny salamanders and toads. They eat fungus. They’ve been seen using human-made bird feeders. They hunt for food by perching on tree trunks and branches, then swoop down and catch it.

Coniferous and deciduous woods with spruce, poplulus, fir and sugar maple (Acer saccharum) dominate are home to gray jays. Gray jays rely on these trees for both survival and breeding. These birds love permanent water features, from ponds to the Great Lakes. Gray jays spend the summer between 2,618 and 3,048 m. During the winter, people reside at lower elevations in the US. Gray jays aren’t seen below 600 m. Gray jays live in spruce bogs at low elevations.

These birds forage on the ground and nest in trees. They seek and store food for 95% of the day. They catch their prey by running on the ground. They can also walk, fly, and run for food. Gray jays sunbathe on the woodland floor to remain warm throughout the winter.

If they are not reproducing, they spend the rest of the day in spruce (Picea) and balsam fir trees (Abies balsamea). Gray jays hide their heads behind their wings to keep warm. Diurnal gray jays are active during the day and sleep at night.

Distribution of the Canada Jay in the USA

From northern Canada and Alaska south through boreal and subalpine forests to northern California on the west coast, Arizona and New Mexico in the Rocky Mountains, northern Wisconsin in the Midwest, and New York on the east.

The Canada Jay can be found in the following states in the United States – Colorado, Idaho, Montana, Utah, Washington, and Wyoming.