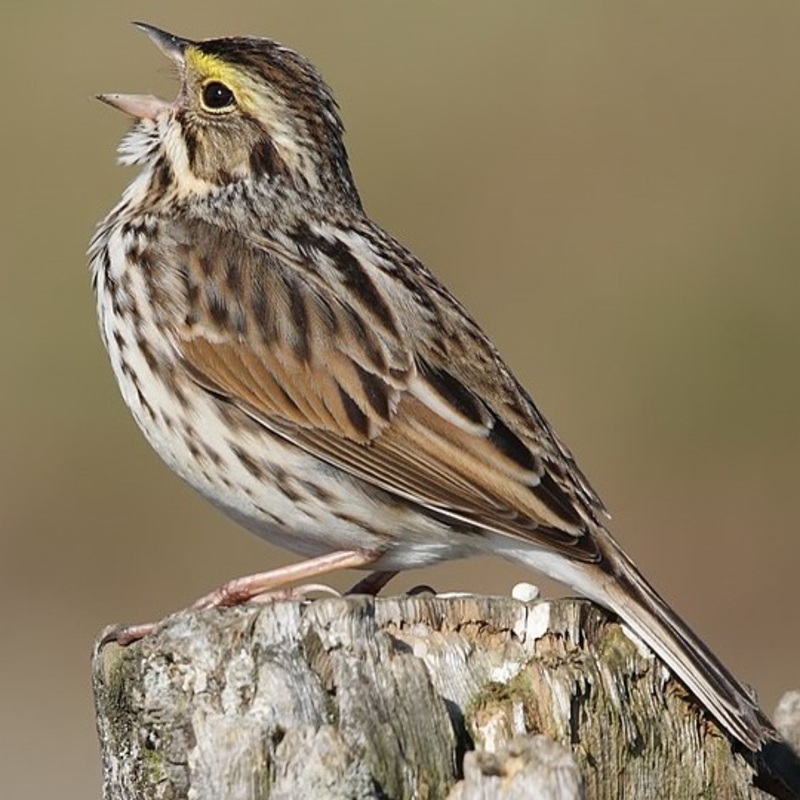 The Savannah sparrow, Passerculus sandwichensis in Latin, is a small New World sparrow that lives in the Savannah region. It was the only member of the genus Passerculus at the time of its discovery, and it is still the only member that is widely accepted today. This species belongs to the family of Passerellidae.

Small sparrow with dark streaks on gray-brown and white underparts, with heavy streaking on the breast and sides. Its brown crown is accented with a pale central stripe, and its pale yellow or white eyebrows stand out against the brown background. Two pale bars are visible on the brown wings. The tail is short and notched at the base. Legs and feet that are pink.

It subsists on seeds, insects, spiders, and occasionally snails. They primarily consume seeds, but during the breeding season, they will also consume insects

These birds forage on the ground or in low bushes; in winter, they can also be found in grazed low-growth grassland, which is particularly common. During the breeding season, they are typically encountered in pairs or family groups, and during the winter migration, they congregate in large flocks. The flight call is a thin seep of information. According to the International Union for Conservation of Nature, the Savannah sparrow is a threatened species. Chirps and trills are interspersed throughout the song.

The Savannah sparrow has many subspecies, some of which have been split off as separate species. The plumage coloration of the various forms varies.

Distribution of the Savannah sparrow in the USA

Breeds from Alaska east to Labrador and south to New Jersey, Kentucky, and northern Mexico, with the majority of breeding occurring in Alaska. Winters are spent traveling north from Mexico to the southwestern British Columbia and Massachusetts regions. These birds are commonly found and seen all throughout the United States.