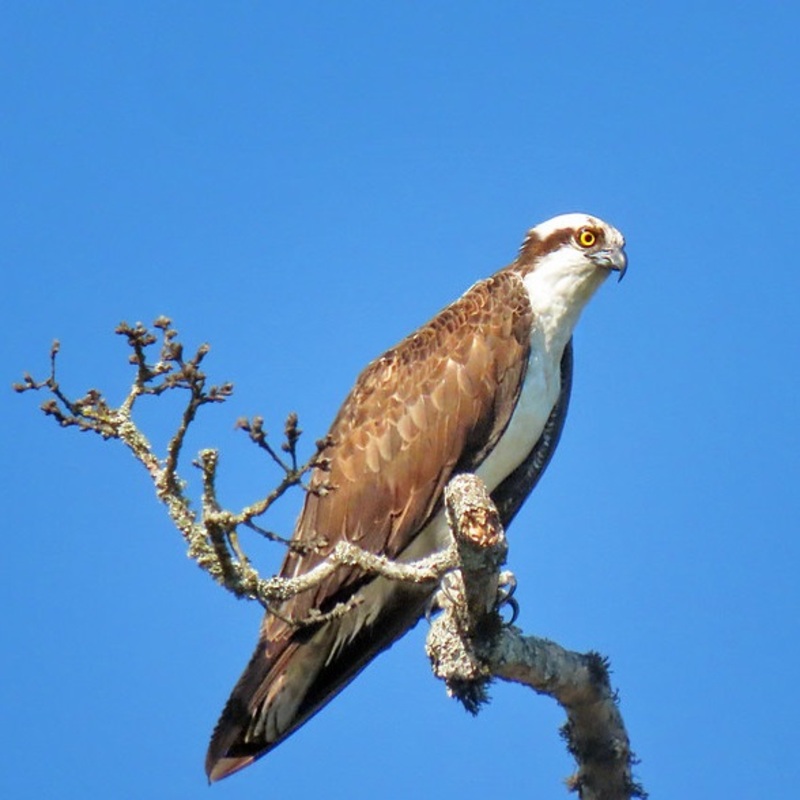 The osprey, or more particularly the western osprey, Pandion haliaetus, is a diurnal fish-eating bird of prey with a worldwide range. It’s a big raptor, 60 cm (24 in) long and 180 cm (71 in) wide. It has brown upperparts and gray heads and underparts.

The osprey nests anywhere near a body of water that provides enough food. It is found on all continents except Antarctica, where it is a non-breeding migrant.

Ospreys are big raptors (53-61 cm in length) with 137-183 cm wingspan. Their lengthy wings feature a distinctive carpal (wrist) curve. They have a brilliant white underside with dark brown carpal joint patches and a dark brown necklace. A black line through each eye and a dark brown back help identify it. This species’ feet are blue-gray, and its beak is black. Adult ospreys have buff-colored points on their dark brown upper-wing and back coverts and a less pronounced necklace. Adults have a yellow iris, whilst juveniles have an orange-red iris. By 18 months, juvenile plumage is gone.

Piscivores, Ospreys are rare among raptors. Their diet is nearly entirely fish (90% prey). They are opportunistic eaters, eating whatever fish species are available to them — in shallow or deeper seas. Studies in North America have identified over 80 osprey prey species. However, two or three common species may dominate an osprey’s diet.

Ospreys are widely distributed due to their ability to dwell virtually any place with suitable nesting places and shallow water with fish. A salt marsh, mangrove (Rhizophora) swamp, cypress (Taxodium) swamp, lake, bog, reservoir, or river are all within 3 to 5 kilometers of a nest. The utilization of each of these habitat categories varies by area.

Also known as the western osprey.

Distribution of the Osprey in the USA

Ospreys winter or breed on every continent except Antarctica. Ospreys do not breed in South America or Indo-Malaysia, but winter there. Wintering Ospreys in Egypt and Red Sea Islands Scandinavia and the Chesapeake Bay region of the United States have the most ospreys.