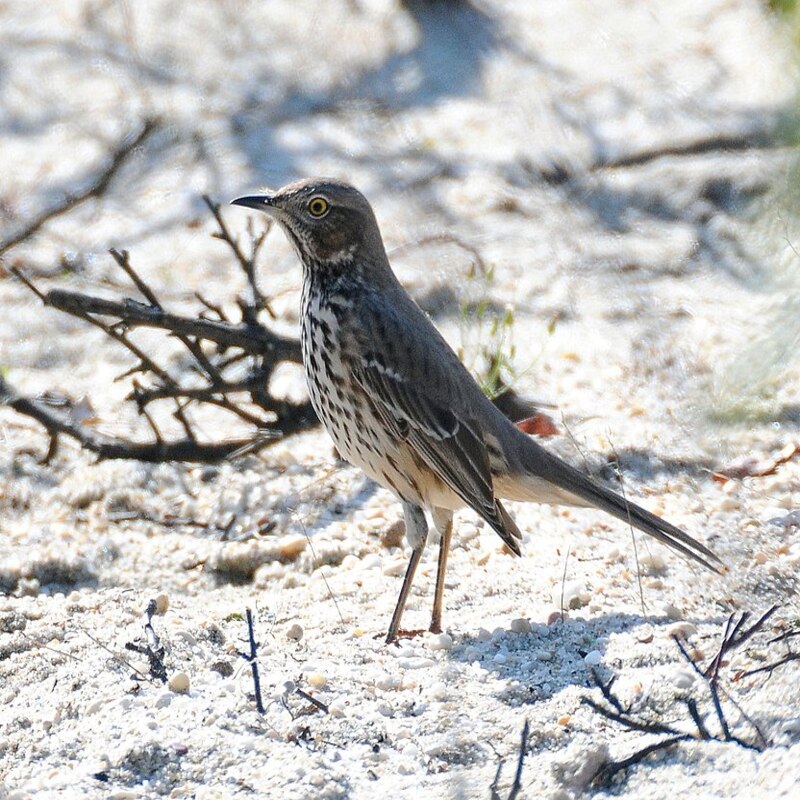 Oreoscoptes montanus, commonly known as Sage thrasher, are medium-sized passerine birds belonging to the family Mimidae, which also includes mockingbirds, tremblers, and New World catbirds. They are found in the United States, Canada, and Mexico. In the genus Oreoscoptes, it is the only member of the species. This appears to be more closely related to the mockingbirds than to the Caribbean thrashers, at least at first glance.

Gray upper parts and pale brown wash on a small thrasher. The bill is short and slightly decurved, with a gray head. The wings are dark in color, with thin white bars running through them. The tail is black with white edges. The legs and feet are entirely black. High-speed flight with shallow wing beats.

In summer, insects are their primary food source, but they also consume berries, particularly in the winter. They are most often found searching for insects on the ground in brushy areas.

It prefers arid environments such as sagebrush plains and the bottoms of rocky canyons to moist, forested areas.

A song is a long, melodious ramble made up of a variety of notes and syllables that is repeated over and over. Some birds sing all night long, especially when the moon is full, and this is especially true for owls. “chuck-chuck” is the alarm call.

Distribution of the Sage thrasher in the USA

This bird, which is native to the United States, Canada, and Mexico, prefers shrubland ecosystems in temperate, subtropical, or tropical climates. From southern Canada to northern Arizona and New Mexico, this bird’s breeding range encompasses western North America.