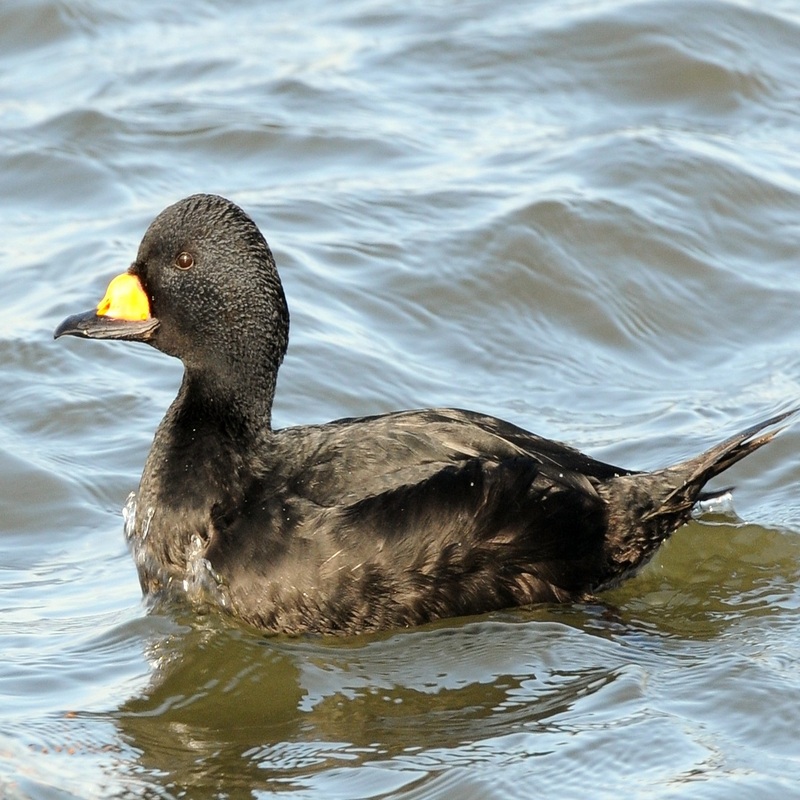 The black scoter, sometimes known as the American scoter, is a large sea duck (Melanitta americana). The genus name is derived from the Ancient Greek melas, which means “black,” and netta, which means “duck.” The genus name is derived from the Latin word for “American.” It shares the subgenus Oidemia with the common scoter M. nigra; the two are occasionally regarded conspecific, with the black scoter referred to as M. nigra americana.

The male is all black, save for a brilliant yellow knob at the base of his black beak. The female is grayish-brown in color with pale white streaks running down her sides. Her bill is black, and her cheeks are grayish-white.

Specifically, mollusks and insects. At sea, it mostly feeds on mollusks, particularly mussels and other bivalves; however, it also consumes crustaceans, marine worms, and echinoderms. During the summer, eats a variety of aquatic insects, as well as fish eggs, mollusks, tiny fish, and some plant material.

The black scoter breeds in Labrador and Newfoundland, southeast and northwest of Hudson Bay. It is also found east of the Yana River on the Siberian side of the Bering Straits.

While migrating or wintering along the seacoasts, this species dives for crustaceans and molluscs and feeds on insects and their larvae, particularly caddisflies, fish eggs, and, more infrequently, vegetation such as duckweed while breeding on freshwater. In winter, it congregates in big flocks on suitable coastal waters.

Distribution of the Black Scoter in the USA

Breeding areas include western Alaska, the Hudson Bay region, and Labrador. Winters along the shores of Alaska, California, Newfoundland, and the Carolinas South Carolina, and North Carolina, as well as portions of the Gulf Coast and the Great Lakes.