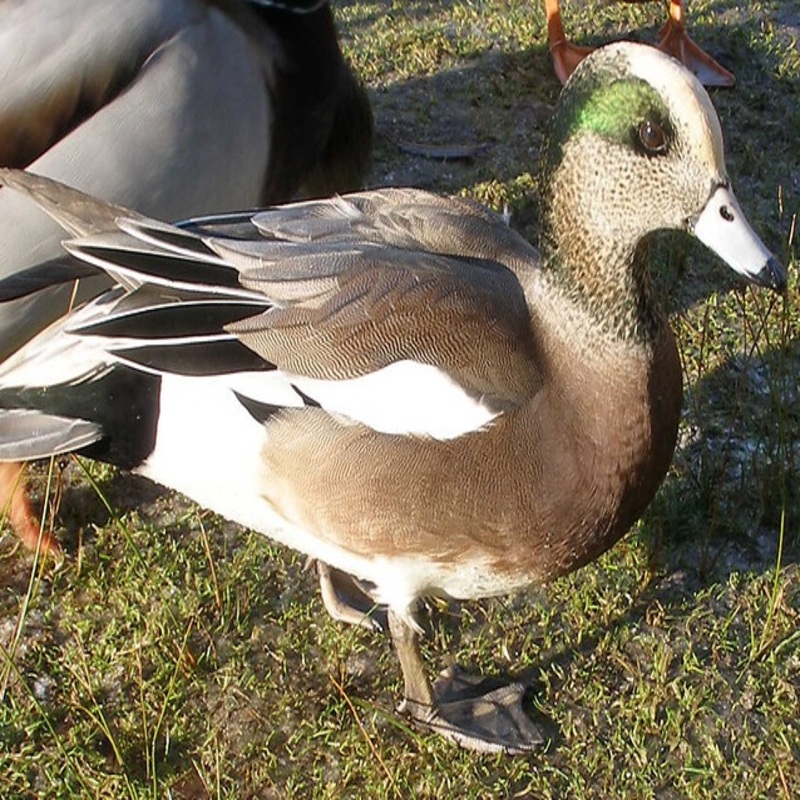 The American wigeon, Mareca americana, sometimes known as the baldpate, is a North American species of dabbling duck. Formerly classified as Anas, this species is now classified with the other wigeons in the genus Mareca, a dabbling duck. It is the American equivalent of the Eurasian wigeon. Mareca is derived from the Brazilian-Portuguese word Marréco, which refers to a little duck, and americana refers to the United States of America.

This is a medium-sized duck with a brown body, white cap, a huge green ear patch reaching to the rear of the head, buff washed breast and sides, and a white belly with brown and black combination in its wings.

They eat on a range of aquatic and terrestrial insects, including damselflies and caddisflies. However, this type of food accounts for a little portion of their diet. The primary food source is aquatic plants, grasses, agricultural plants stems, and leafy sections.

American Wigeons cluster in flocks on lakes and marshes, where they nibble aquatic vegetation from the surface or tip up to capture plants beneath the water. American Wigeons can be found throughout the year in freshwater wetlands, lakes, slow-moving rivers, impoundments, flooded fields, estuaries, bays, and marshes.

They are active and opportunistic feeders, frequently foraging in open water on objects brought to the surface by diving ducks and coots.

Distribution of the American Wigeon in the USA

Throughout much of North America, this species is prevalent. Breeds from Alaska, northern Manitoba, and southern Quebec south to Nevada, the Dakotas, Colorado, and the Great Lakes region, with some populations extending further east.