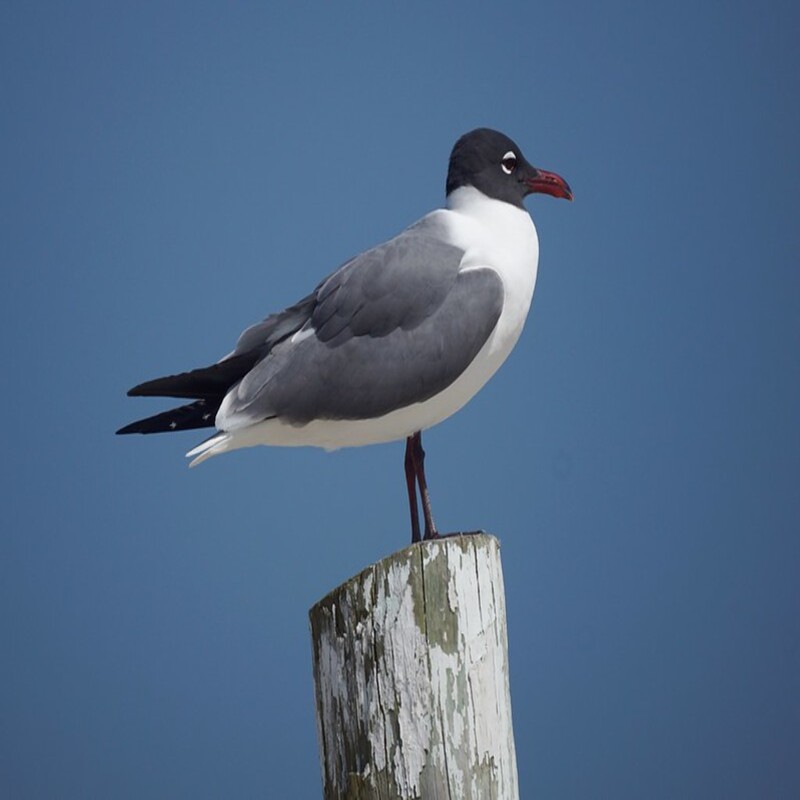 The laughing gull (Leucophaeus atricilla) is a North and South American medium-sized gull. It is an opportunistic omnivore and scavenger named from its laugh-like call. It breeds in vast colonies mostly in North America’s Atlantic coast, the Caribbean, and northern South America.

The underparts of laughing gulls are white, while the back is dark gray. The wings are a dark gray color with a black tip. The hue of the legs ranges from dark orange to black. Laughing gulls have a blackhead and a vivid red bill during the breeding season.

Eats a variety of small fish, crustaceans, and insects, as well as earthworms, snails, and trash. Gathers in late spring to devour horseshoe crab eggs. Eats the eggs and young of other birds, particularly Royal Terns.

Salt marshes, coastal bays, piers, beaches, and the ocean are all examples of natural habitats. Generally found only along the coast, especially near beaches and salt marshes, but often found several miles inland along rivers, fields, and dumps.

The Laughing Gull is mostly diurnal, meaning it is active throughout the day. During the breeding season, it also forages at night. It normally hunts for food along the seashore at night, but it will also hover above lights to gather insects. After the eggs hatch, the adult Laughing Gull takes the eggshells from the nest.

Distribution of the Laughing Gull in the USA

Lives primarily on the Atlantic and Gulf coasts of the United States, from Maine to Florida and Texas. It can also be found along Mexico’s Gulf coast, inland southern Mexico, the West Indies, and the Baja Peninsula. Winters in Virginia on a regular basis, with fewer numbers further north.