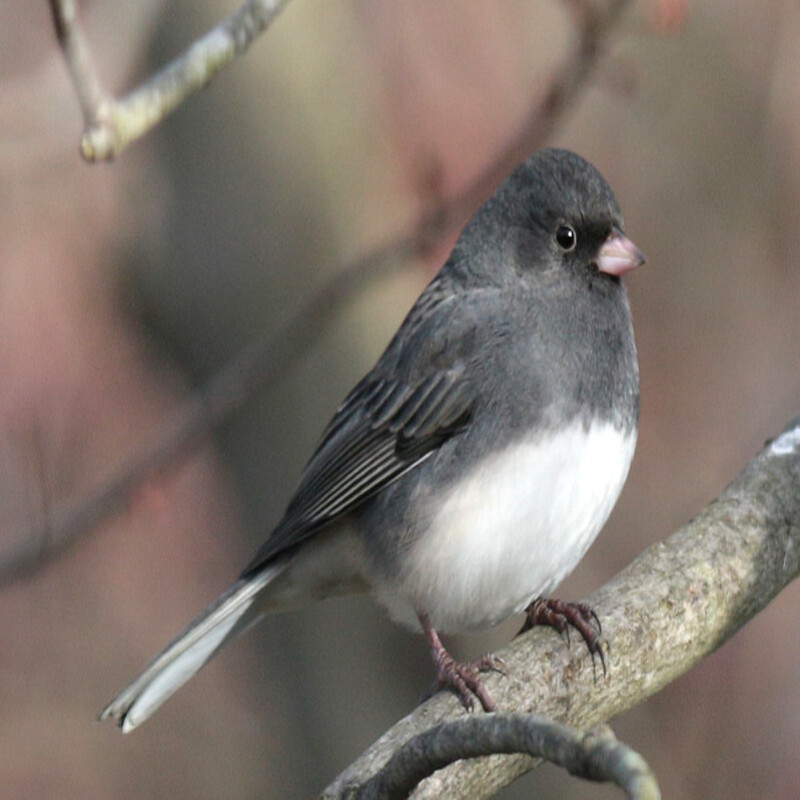 Junco hyemalis, commonly know as the dark-eyed junco is a New World sparrow species in the family of Passerellidae. This bird breeds in the Arctic and winters across much of temperate North America. Like the closely related fox sparrow, its systematics is still a mystery.

Quick Overview: Junco Hyemalis – Dark-Eyed Junco
Body size: Around 4.5-5.5in (11-14 cm) and a weight of 23 g (.08 oz)
Main colors: Gray, White, Brown, Pink
Range: Throughout the United States
Migratory Bird: Yes
Best time of the year to see in the U.S.: All-year-round in the Western and Northeastern United States. During winter in the Southern and Central U.S.
Conservation Status: Least Concern

The dark-eyed junco is all small and slender. The dark gray head, breast, and upper parts contrast with the white outer tail and white belly of this species. Females and juveniles of dark-eyed junco are browner than adult males and have streaked breasts. Males are typically 5% larger than females. Pink bill, dark eyes.

Dark-eyed juncos forage on the ground for seeds and insects. Insects, non-insect arthropods, and seeds are their preferred non-breeding foods. A lot of insects during the breeding season. During migration and winter, they frequent bird feeders but prefer to feed on the ground rather than pick seeds from an elevated feeder. This species forages by “riding” a grass stem.

Dark-eyed juncos can hop or walk up to 30 cm in one hop. Exceptions are chasing a rival or catching moving food. This species consorts in flocks in the autumn and winter. Winter flocks are typically 15–25 strong. Flocks form 20-30 minutes before sunrise and disperse 45 minutes before sunset to roost. The time spent perching or foraging for food during the day varies with the season and the stage of the reproductive cycle. In the summer, people forage for 4.5 hours and in the winter, they forage for 6 hours. These flocks often mix with American tree sparrows.

The best time to see these species are all-year-round in the Western and Northeastern United States. During winter in the Southern and Central U.S.

Distribution of the Dark-eyed junco in the USA

From Alaska and central Yukon to Labrador and Newfoundland, south to central coastal California, east to eastern California, central Arizona, and western Texas, south to southern Alberta northern and east-central Minnesota, central Michigan, and southern New England. This species winters in Alaska, British Columbia, southern Canada, Mexico, and northern Florida. It is only found in the Nearctic.