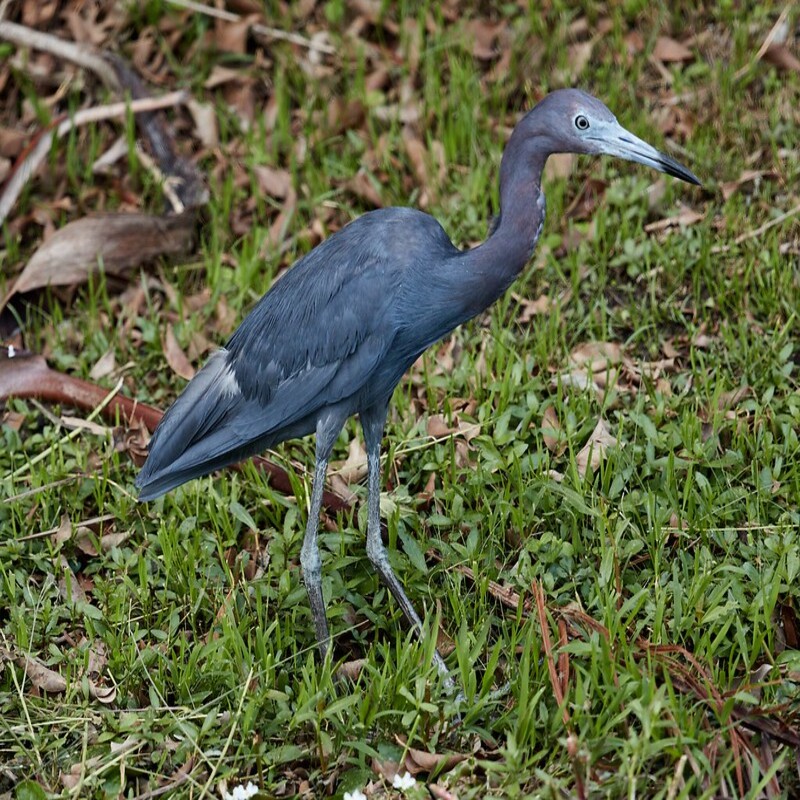 The little blue heron, Egretta caerulea is a small heron species that is a member of the Ardeidae family. Egretta caerulea flies gracefully and powerfully. Their wingbeats are faster than those of larger herons, and they fly with their heads lowered and their legs extended to the back. Usually silent, they occasionally produce a low clucking or croaking sound.

Sex similarities emerge, however, young appear to be unique from adults. Adults have a purple-maroon head and neck. The rest of the plumage is slate gray. The long neck is generally retained in an “S” shape at rest or in flight. The heron’s bill is long and slender, dark gray with a black tip. Black and yellow eyes. The juveniles’ all-white bodies set them apart from other herons. They have a blue bill with a black tip and dull green legs. During their first summer, fall, and winter, they are white, then molt to adult black in February.

Egretta caerulea feeds primarily during the day. They are carnivores, eating fish, frogs, lizards, snakes, and turtles, as well as crustaceans such as fiddler crabs, crayfish, and shrimp. Additionally, they feed on aquatic insects and spiders. They feed on grasshoppers, crickets, beetles, and other grassland insects when swamps and marshes become dry.

While Egretta caerulea frequently inhabits areas near saltwater, it is mostly an inland bird. They favor watery habitats such as ponds, lakes, marshes, swamps, and lagoons, but they will occasionally inhabit flooded and dry grasslands, as well as saltwater beaches.

Egretta caerulea flies gracefully and powerfully. Their wingbeats are faster than those of larger herons, and they fly with their heads lowered and their legs extended to the back. Usually silent, they occasionally produce a low clucking or croaking sound. Their battle sounds are quite distinct and mimic parrot yells.

Distribution of the Little Blue Heron in the USA

Found from Massachusetts to Florida, but is most plentiful along the Gulf of Mexico; also found in the West Indies and along both Mexican coasts south to South America.