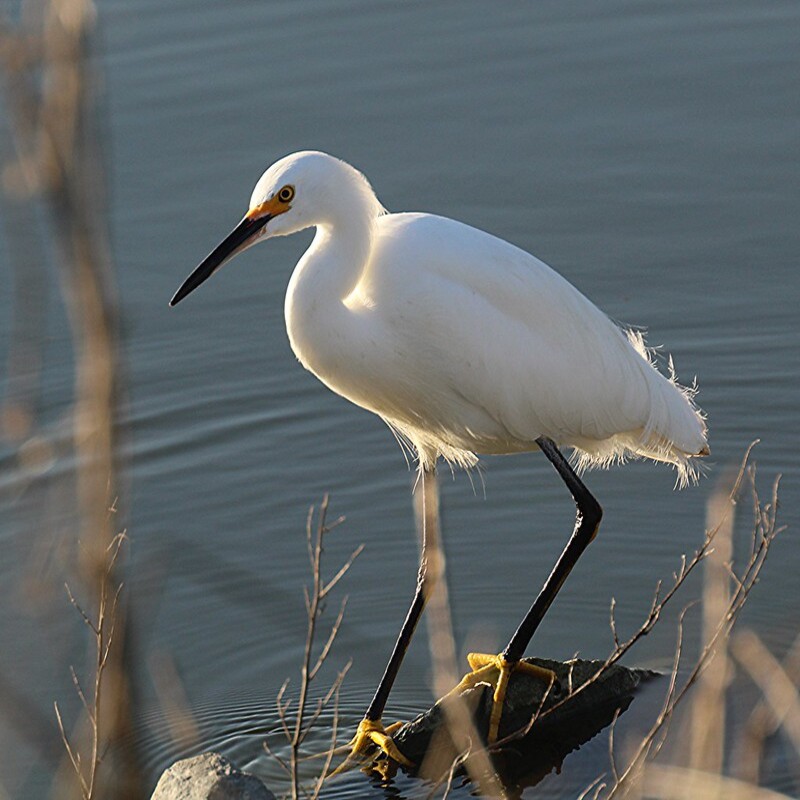 Snowy egrets, Egretta thula are little white herons. The genus name is derived from the Provençal French word for the small egret, aigrette, which is a diminutive of aigron, ‘heron.’ The species name thula is derived from the Araucano word for black-necked swan, which was incorrectly ascribed to this species in 1782 by Chilean naturalist Juan Ignacio Molina.

This medium-sized egret is all white, with a long, slender black bill and yellow lores. Yellow eyes, black legs, and bright yellow feet. During the breeding season, the head, neck, and back are covered in long lacy plumes.

Egretta thula favors foraging settings that are close to bodies of shallow water with abundant food supplies. Earthworms, annelid worms, aquatic and terrestrial insects, crabs, shrimp, crayfish, snails, freshwater and marine fish, frogs, toads, lizards, and snakes all make up its varied diet. Generally, the egret’s diet consists of 75% fish and 25% crustaceans. When compared to other herons, this egret exhibits the greatest variety of foraging habits. Pecking, walking slowly or swiftly, running, jumping, hovering, and “disturb and chase” actions are all used to capture food. Snowy egrets are most active in the early morning and evening.

For feeding purposes, Egretta thula normally favors an area with shallow water inlets. In North America, salt marsh pools, tidal channels, shallow bays, and mangroves are among the most desirable environments. Due to the abundance and stability of food sources, habitats are most prevalent in coastal areas and islands. Egrets move to the Caribbean during the winter months to nest and roost in mangroves.

The Egretta thula stands straight, its wings near to its body. This upright posture is advantageous for foraging since it enables the egret to make fast directional changes in order to capture its prey. They are most active at dawn and dusk (crepuscular); they have the ability to fly but are incapable of swimming. Snowy egrets engage in a variety of self-care habits, including brushing their wings, scratching their heads to remove insects off their bodies, and bathing. Egretta thula spends the majority of its time sleeping.

Distribution of the Snowy Egrets in the USA

Breeds locally, primarily along beaches, from Oregon and California east to southern New England. Winters in California, Arizona, and Virginia before continuing south to the West Indies, Mexico, and South America.