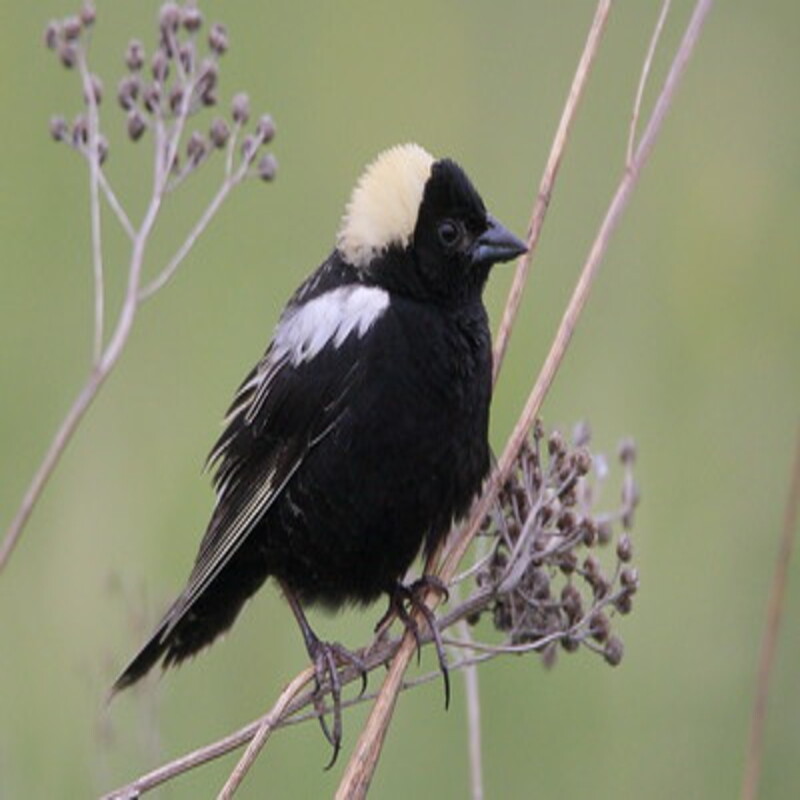 The bobolink, Dolichonyx oryzivorus is the only member of the Dolichonyx genus. The “rice bird” name comes from its preference for cultivated grains. Hefty adult males are predominantly black, with whitish neck, lower back, and rumps. Darker wings and tails are found on adult females. During the summer, bobolinks breed throughout Northern America, with most of their range being in southern Canada. These birds are falling in numbers and are a threatened species across Canada.

Sex dimorphism in Bobolinks during mating season. Their black breeding plumage blends with their tall grass environment. Males have a large white patch along their backs, a buttery rear crown, and a shiny black beak. Males and females appear alike while not breeding. They have pale bills. The bills of all sexes and ages are cone-shaped. They are yellowish-brown with black stripes behind their eyes and down their backs. A stripe runs over their eyes and through their crown. These little critters have brown wings with striped tails.

Young are fed based on food availability and weather. Male bobolinks spend more time at primary females’ nests than secondary females’ nests. Nestlings are fed Lepidoptera, sawfly, and arctiid larvae, as well as mayflies. Male bobolinks consume dandelion seeds and cutworms in May. A few males start consuming cinquefoil seeds in June. Bobolinks eat on rice fields while migrating. Bobolinks are diurnal foragers that roost at night. Bobolinks hunt insects and seeds on the ground.

Bobolinks are reedbirds since they live in grassy meadows and marshes. They nest on hay fields in the eastern and midwestern US. Wintering areas include Brazil, Uruguay, Paraguay, and northern Argentina. During migration, they pause in rice fields, earning them the moniker “rice-birds”. Nest survival is higher among ancient farms and pastures. Away from woods, these birds choose tall grassy regions to nest.

Male bobolinks swiftly establish mating areas through singing. Their actions are tied to music. Males sing and perform aerial displays to attract mates and assure the next generation’s survival. Females conceal during nesting season. When alarmed near their nest, they often flee across the grass to distract a predator from their nestlings. Females also land some meters distant from their nests and go to them. In general, they are social and may be seen in huge flocks.

Distribution of the Bobolink in the USA