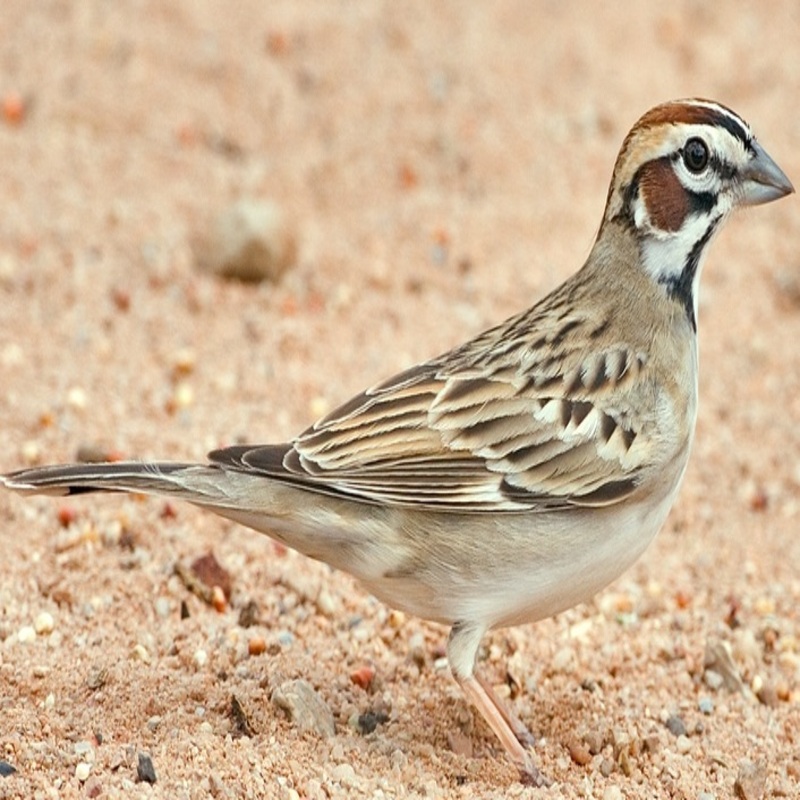 A large new world sparrow, the lark sparrow or Chondestes grammacus in Latin is the only Chondestes species. They belong to the Passerellidae family. It was said that with its bold face pattern and broad, white-edged tail, this sparrow stands out among the rest. Lark Sparrows prefer open areas with scattered bushes, which are more common in the West and Midwest than in the East. They fly higher than most sparrows, giving a sharp call as they pass overhead.

The Lark Sparrow is thought to be the most closely related sparrow to the Vesper Sparrow in terms of genetics.

The Lark Sparrow has bold features that set it apart from other sparrows. In-flight, the long tail’s white triangles stand out. Gray-brown rump, with dark streaks on back. The clear, white breast has a striking black dot. The alternating chestnut, white, and blackhead pattern is distinctive. The head is chestnut with a white stripe. First-winter birds have the same pattern, but the cheek and head patches are gray-brown rather than chestnut.

Mostly seeds and bugs During the winter, it feeds on grass and weed seeds as well as waste grain. Eats grasshoppers, beetles, caterpillars, and other insects, especially in the summer. Young are fed insects and grass seeds.

Lark Sparrows prefer grasslands with scattered shrubs in the shrub-steppe zone. They are often found in degraded shrub-steppe, open forests, and grasslands.

The Lark Sparrow hops or walks on the ground. When disturbed, it flies to a fence or low branch. The male sings loudly from an exposed perch near a wooded area. He struts back and forth in front of the female, pointing his beak upward, spreads his tail, and flaps his wings. During mating, the male often passes a twig to the female. They migrate in flocks of Lark Sparrows or mixed flocks of sparrows.

Distribution of the Lark sparrow in the USA