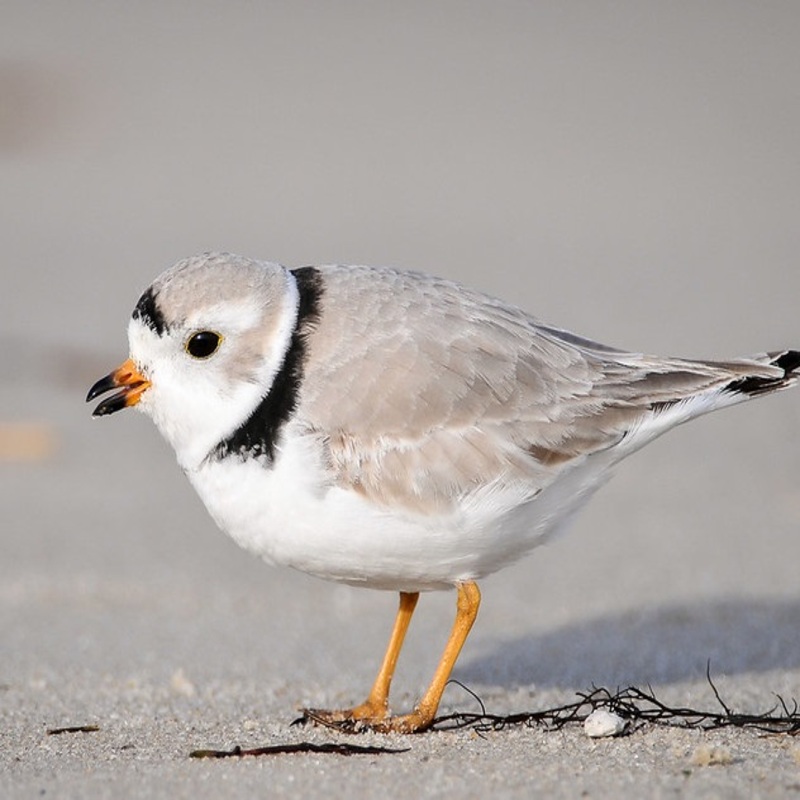 The piping plover, Charadrius melodus is a little sand-colored shorebird about the size of a sparrow that nests and eats along North American coastal sand and gravel beaches. The name of the bird comes from its plaintive bell-like whistles, which are frequently heard before the bird appears. At the moment, the total population is believed to be between 7600 and 8400 inhabitants. Although intensive conservation groups have resulted in modest population increase, this trend is predicted to reverse if conservation efforts are discontinued.

The piping plover is a little sand brown-colored shorebird about the size of a sparrow that nests and eats along North American coastal sand and gravel beaches. White upper tail with a black tip that is white-edged. Adults have yellow-orange-red legs, a black band going from eye to eye across their forehead, and a black stripe running along their breast line.

Piping plovers forage on exposed beach surfaces, pecking for crustaceans less than a half-inch below the surface. They are primarily active during the day and feed on insects, marine worms, crustaceans, and mollusks, as well as flies and beetle eggs, and larvae.

Piping plovers prefer wide, flat, open, sandy beaches devoid of grass or other vegetation. In North America, piping plovers nest in three locations: along the coasts of the Great Lakes, along the banks of rivers and lakes in the Northern Great Plains, and along the Atlantic Coast.

The rituals entail displays and behavior that vary slightly amongst birds. The most frequently observed display is a courtship flight in which the male plover circles through the air, continually peeping and frequently swooping quite close to the female.

Distribution of the Piping Plover in the USA

This species is almost typically found in open sandy places adjacent to bodies of water, such as the ocean or lakeside beaches or river sandbars. It is found along the Atlantic and Gulf Coasts during the winter, from Virginia to the Yucatan Peninsula; it migrates north to breed and south to winter.