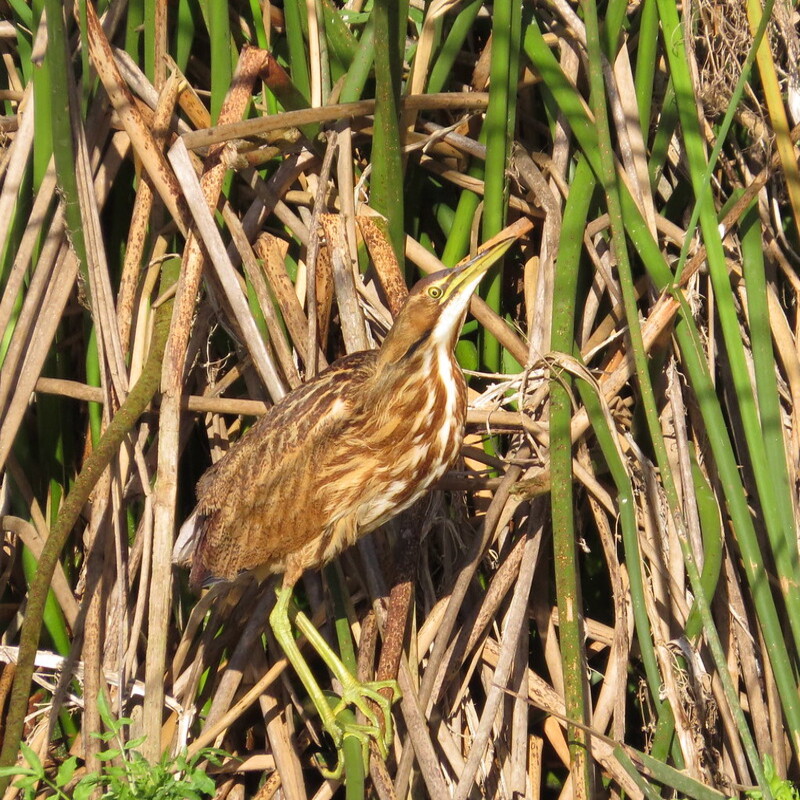 American bittern, Botaurus lentiginosus is a wading bird species belonging to the heron family. It breeds in Canada and the northern and central United States, wintering in the Gulf Coast states of the United States, all of Florida into the Everglades, the Caribbean islands, and parts of Central America.

American Bitterns are little herons with a strong body and neck, short legs, and a white neck. The bird’s upperside is brown with fine black speckles. Brown and white streaks cover the undersides. A lengthy black patch runs down the side of the neck from behind the eye.

The American Bittern’s basic food consists of insects, frogs, crayfish, and small fish and animals. When foraging, it mostly relies on stealth, remaining still while waiting for prey to pass by. Its color further contributes to its ability to remain undiscovered by prey. When the bird’s prey is within reach, it lunges forward and seizes it in its bill. After biting or shaking the prey, it is swallowed head first. Foraging microhabitats include forest margins and shorelines. Avoid even-aged stands of older, thick, or dry vegetation.

The American Bittern breeds in areas of freshwater wetlands characterized by tall emergent vegetation, shorelines, and vegetative fringes. The bird prefers wetlands created by beavers to those formed by glaciers.

Little is known about the species’ migration patterns. Northern populations known to migrate are those that live in places where temperatures can fall below freezing. Southern populations, on the other hand, appear to be non-migratory, inhabiting locations with milder temperatures. The species’ members appear to be largely asocial, having very few pair ties between sexes. Foraging is an entirely solitary activity.

Distribution of the American Bittern in the USA

Breeds in southern Alaska, Manitoba, and Newfoundland, as well as in California, Kansas, and Pennsylvania. Winters along the coast of British Columbia and the west coast, as well as the Gulf and Atlantic coasts, and occasionally as far south as Costa Rica and the Greater Antilles.