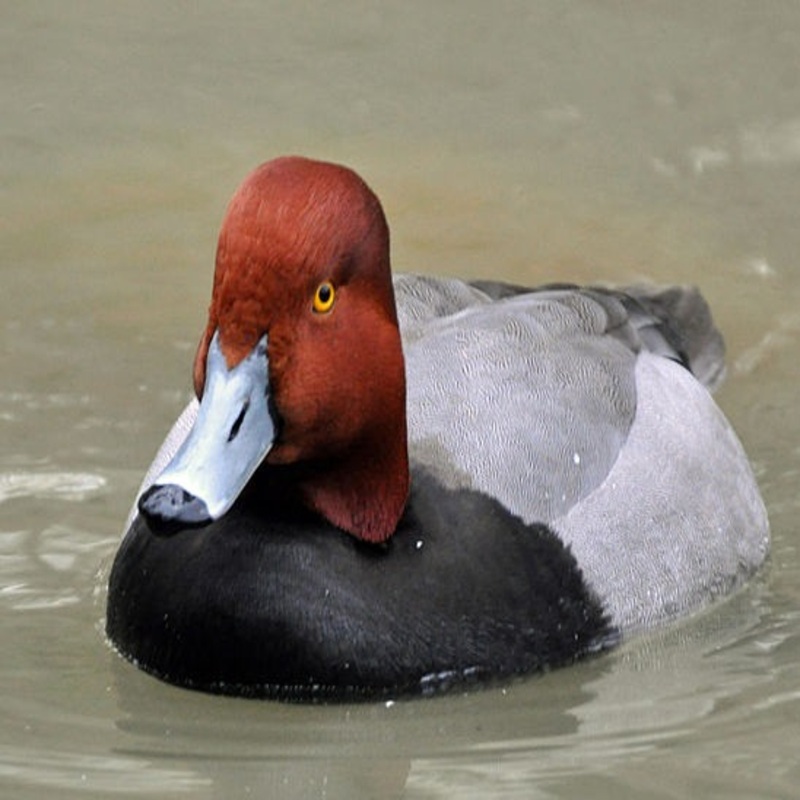 The redhead (Aythya americana) is a diving duck of modest size. The scientific name is derived from the Greek aithuia, which refers to an unidentified seabird reported by Hesychius and Aristotle, and Latin americana, which refers to America. It is classified as a member of the genus Aythya, along with 11 other recognized species. The redhead and common pochard are sibling species to the canvasback.

Gray back and sides, black upper back, breast, rump, and tail, and a white belly characterize this medium-sized diving duck. The head and neck are rufous-brown, with a black tip to the blue-gray bill; the eyes are yellow. Females are duller and browner in color, with a bright patch around the bill’s base.

The diet of a redhead is primarily constituted of vegetable materials. It dives to the bottom of bodies of water in search of aquatic plants and mollusks, and dabbles on the surface of shallow marshes in search of insects.

Aythya americana prefers shallow freshwater lakes, ponds, and marshes as a habitat. A body of water must be at least 28 inches deep in order for the ducks to dive. Marshes also provide a habitat for aquatic plants and vegetative cover, which serves as a form of protection.

These nonbreeding hens are almost certainly mostly yearlings. Redheads began nesting in the grassland marshes and potholes around midsummer. Semiparasitic behavior is defined as a normal activity and egg-laying in other nests. When a hen lays all of her eggs in another duck’s nest, this is called parasitic.

Distribution of the Redhead in the USA

Breeds on the northern plains of the United States and Canada, from Alaska to Colorado, as well as the western and southwest intermountain marshes. Winters in the southern United States, from California through Florida and south to Mexico.